Pad work is a staple in Muay Thai training. Although it works a little differently for the beginner than it does for the fighter, it's primary purposes remain the same: Target practice. Let's take a step back from the strategic purposes of pad holding and focus on just the small details that really make a difference. 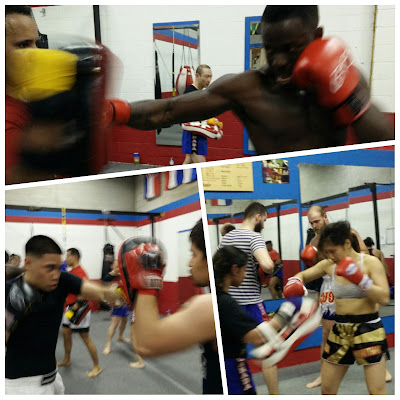 Padwork as a battle

Ajahn Suchart once said that good pad holding is like a "battle".  The striker and the pad holder press against each other with each strike. The pad holder usually presses at about 10-20% max of the distance that the striker attacks, forcing the striker to press THROUGH the target to achieve full extension. This simulates the depth and power needed to punch or elbow through the jaw, knee through the body, and kick through the various targets. Muay Thai, like the sword in Miyamoto Musashi's Book of Five Rings, is most effective in cutting first, not slashing:
"Cutting, whatever form of cutting it is, is decisive, with a resolute


spirit. Slashing is nothing more than touching the enemy. Even if you slash strongly, and even if the enemy dies instantly, it is slashing. When you cut, your spirit is resolved"


Therefore, the pad holder must be able to press adequately to allow the striker to go deep with their technique and attack with intent, rather than just smacking the surface of the target.

If done incorrectly, pad holding can be very painful for the pad holder. This is especially true when the striker is much bigger or stronger than their holder. The holder must utilize their body for support instead of their limbs. For strong punches, rotating the body (as you would for your own punch) will help you press against a powerful striker. If you use only your arms to press, the force of the punch can easily strain or (in the worse case) tear your shoulders. Any small injury from pad holding can build over time into a major one.

Holding for kicks and knees also require the body to brace and press toward the strike. If not, your arms take all of the force and a strong kicker/knee-er will make you hit yourself in the gut. Absorb the strike across a larger area by supporting your press with your body.

Larger or stronger pad holders may find don't need to use their body as much. This is fine when the striker is smaller or weaker than you are. However, pay attention to your partner and use the technique necessary to ensure both of you are safe and able to hit pads for years to come.

Here is Ajahn Suchart, who is much smaller than his fighter, holding for Simon Marcus. He presses enough to make Simon work, while using his body to save himself:

One of the corner stones of Ajahn's mastery in building technique on the pads is that he doesn't move when he absorbs a strong strike. Simon's power and size should be enough to move Ajahn, but stability and technique keeps the pad holder in front of the striker the entire way. This means the pad holder is able to continue holding or attack back with their own strike right away.

A good pad holder improves their striker's technique and habits. They notice when their partner's hand drops, or if they aren't connecting accurately or powerful enough. They help their partner by reminding and encouraging them to keep their technique proper.

By doing this, the pad holder develops a sense of good and bad habits, which translates into the ring. Seeing and processing a bad habit of an opponent in the ring is the first and most crucial step to engineering the knock out. An opponent who consistently leans forward too much on their punches is susceptible to sweeps or leg kicks or knees. By paying attention to their partners in pad holding, the pad holders ultimately develop their own fight sense and sharpen their over all abilities.

Being a good pad holder can benefit everyone. Stay alert, be a team player and watch the team grow.

Dropped on the Internet by ThisOne at 12:06 PM