PCP's Movie Pick of the Month for June: Lone Survivor (2014)

Ok, this month's pick is a little more serious than the last one. Violence is about the only thing that this pick has in common with Ninja Assassin, however the violence in this one is significantly more unsettling. Lone Survivor is one of the most visceral war movies that I've ever seen. It's certainly not without its flaws (it just barely stops short of being ultra-pro-American war propaganda). It does not examine the morality of the war in Afghanistan and if the Americans should have been there in the first place, but observed through the lens of a survival story it illustrates what a well trained mind is capable of doing. 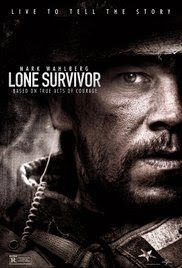 Peter Berg's Lone Survivor depicts the true story of a military operation in Afghanistan that went very wrong. It is based on the book Lone Survivor by Marcus Luttrell, who himself survived the calamitous event by sheer force of will, grit, and determination. The film remains faithful to his account of the situation (that is to say the enemy in the film is not exactly portrayed as 3-dimensional characters). It doesn't pull its punches when it comes to showing the brutality of war and the amount of punishment that a mentally tough person can take and still manage to push through and survive.

Mark Walhberg, Taylor Kitsch, Emile Hirsch, and Ben Foster portray a 4-man SEAL team that was sent to kill or capture a senior Taliban commander in the Hindu Kush region in 2005. A series of uncontrollable events leads the team to a serious ethical dilemma. First, they discover that the region is significantly heavier guarded than they briefings had lead them to believe, with several hundred Taliban soldiers present rather than a dozen. Second, they find themselves in a dead zone for their radios, cut off from their commanders who could provide support to them. And finally, by pure chance of bad luck, the team is discovered by a farmer and his two sons before they come close to completing their objective. This leads to a moral argument between the four men on how to deal with the situation; their options being to protect themselves first and kill the civilians, committing a war crime in the process, or releasing them and running the risk of the much larger Taliban army being alerted to their presence should the farmers report on their whereabouts. After serious consideration of the consequences of murdering them vs. the consequences of releasing them (an argument which saves this film from being propaganda in my opinion, as it portrays some of the team members as considering committing a war crime, a discussion the actual military might not be too fond of), the SEALs decide to go with the second option and let the farmers go, abort the mission, and attempt to withdraw from the area on foot. This leads to a prolonged gunfight between the SEALs and the mobilized Taliban forces, with tragic results. It's no spoiler to say that, in a movie called Lone Survivor, not everybody makes it. 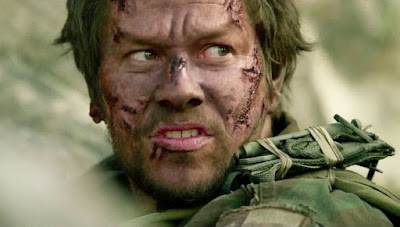 At times, Lone Survivor reminds me of 127 Hours, a movie pick from last year, in that it focuses on the reservoir of mental toughness that a specific individual had to draw from in an extraordinary situation. The big difference, however is that 127 Hours depicts a regular Joe in a survival situation, Lone Survivor depicts the resilience of four above average men who's minds and bodies were hardened by one of the most intense military training regimes in existence. In the face of extreme adversity, bodily harm and almost certain death, they are portrayed as remaining composed, collected, and acting decisively. There is no panic. This is best illustrated by the calculated manner in which they approach the decision to jump off a 20 foot cliff rather than face 200 Taliban head on. They make a quick decision regarding their survival and none of them hesitate for a second. This sequence is 30 seconds long, feels much longer to watch, and results in bruises, broken bones, and serious bodily harm to all of the main characters. It is a testament to the feats that a well trained, mentally tough person is capable of. And therein lies the parallel between Lone Survivor and the sport of Muay Thai. An elite level Muay Thai fighter does not start out that way, rather they are crafted through a rigorous training regime and battle experience. There is nothing natural about it. Some people are definitely not cut out for it and many fall off along the way. But mental and physical toughness are things that can be trained. You can push yourself farther than you know. Learn to be skilled, train to be strong and eventually, a true warrior will be created.

This movie is available on Netflix. Give it a watch if you're not squeamish seeing blood or broken bones.

The opening sequence of the movie shows documentary footage of the so-called "Hell Week" that
SEAL prospects have to complete in order to be admitted to their training program.