This Saturday YUMT had a lot going on.

A big congrats goes out to Katherine for a completing the Blue shorts test, which is no small feat!

We had Arash, Vlad and our ninja helper Andrew H. represent us today at Kombat Art's Sparfest!

Arash and Andrew H. had a very close match with each other right off the bat. Although from the same gym and Kru, they were matched as they were the only two people at their weight who had relatively the same amount of experience as each other.

Vlad's turn came not very long after, and showed great improvements with his technique, as well as putting on a great display of clinch work. Real talk, Vlad, real talk.

A big thanks goes out to everyone from YUMT and friends who have dedicated themselves and shown support for our students (special thanks to: Niloo, Brian, Eric, Richard, Chris S, Nic and Brandon)

Lastly, a big thanks to Kru for all her efforts (having worked around the clock to prepare and coach everyone), and PooChoi Kru Lindor for all his guidance and help.

*Pictures will be posted soon! (and maybe video)*
Dropped on the Internet by ThisOne at 7:23 PM No comments:

You may have noticed that I've been profiling some fighters on the blog (so far: Samart, Namsaknoi, Christine Toledo and Orono Wor Petchpun). These are either suggested by Kru, or fighters well known from Thailand and abroad that I think are worth looking at.

In each of them I'll post some of their achievements as well as a couple videos to get you started if you are interested in that particular fighter.

Aside from Kru's suggestions, I'll try to profile fighters that you may not have seen full profiles for on other blogs or websites.

Dropped on the Internet by ThisOne at 3:22 PM No comments:

Not to be confused with Orono Por Muang Ubon (the guy JWP fought), Orono Wor Petchpun is one of the best fighters in Thailand today.

Orono started Muay Thai at 15 years old, which by Thai standards is pretty late; but that clearly hasn't stopped him from reaching the top.

Holding wins over Yodsanklai (2 KOs!) and Buakao (2 decisions) (when they were both fighting at light weights) and Saenchai Sor Kingstar, he is a very crafty and famous fighter.

Orono is now ranked 7th at 130lbs in Lumpinee and 9th in all of Thailand.

He's a good name to know since he's fought and defeated so many great fighters.

He has a very technical style specializing in elbows and grappling.
Dropped on the Internet by ThisOne at 11:32 AM No comments:

If you aren't on Facebook, here is a link Kru posted:
http://www.christinetoledo.com/pdf/christineissue1_8.pdf
"Sawadeekha,
Here is the interview with Christine Toledo.
Please read about one of the best female fighters of our time."

I won't post too much info since A. I don't have much, and B. you've got the interview link above; However, she has an impressive 14-2 record and (as you can see from the picture) some championship belts.

I couldn't find any fights on youtube, so you'll have to stick with the Highlight.

a nice action shot
Dropped on the Internet by ThisOne at 11:00 AM No comments:

I realize a lot of people who join YUMT is entirely new to the sport itself, and generally don't know much about actual Thai fighters. While Kru has assigned our fighters homework to look up Thai fighters, I figure once and a while I can post about some well known ones. 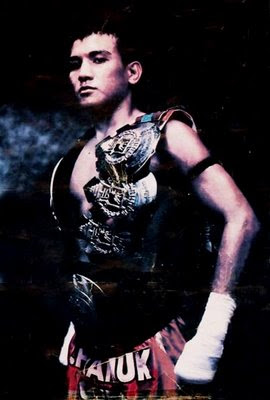 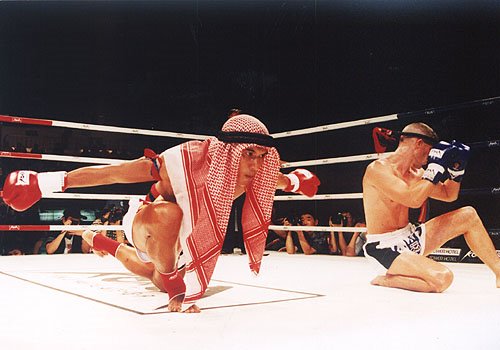 Namsmaknoi is one of the most celebrated fighters of the modern era with his mutiple titles and prestigious awards. He has shared the ring with many legends and has wins over talents such as Saenchai sor Kingstar and Attachai Fairtex. He has fought in many different places: Thailand, Japan, Korea and Israel (when he boxed).

Holding the Lumpinee title for 6 years, he retired a champion and began teaching. He has recently (mid 2008) made a return to the ring. 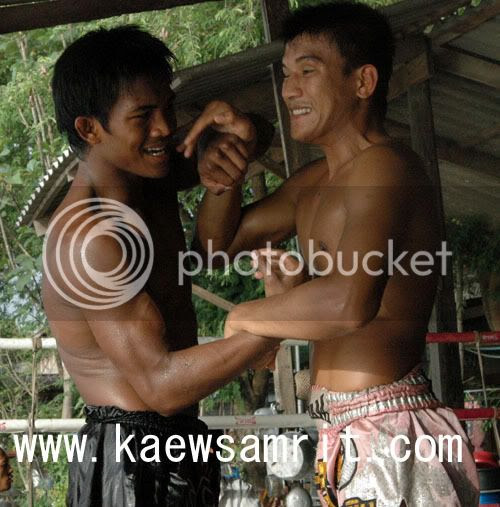 An interesting tidbit: Namsaknoi fought out of Por Pramuk gym for a while, and was stablemates with none other than Thai K-1 superstar, Buakao. Buakao has named Namsaknoi as one of his idols (can't remember where I read that but I'm pretty sure he does).

For an in depth biography of Namsak, check out this article by Rob Cox: http://news.axkickboxing.com/article?id=264
Dropped on the Internet by ThisOne at 5:11 PM 1 comment:

Championship fight between 2 rivals who have met in the ring twice before this. Nuanthoranee is now supposedly one of K-1 MAX golden boy Masato's trainer.

This fight has a nice variety of techniques...elbows, knees, punching and kicks; it's all in here. 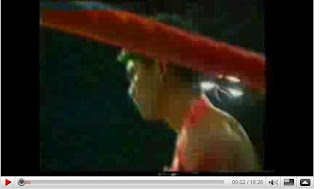 Dropped on the Internet by ThisOne at 11:04 PM No comments: 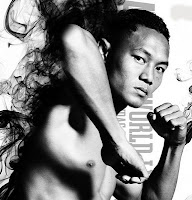 For your entertainment: Here's a video on Saenchai showcasing some of his unorthodox techniques, as well as two other fighters.

If you weren't there, Kru suggested a few months back to check Saenchai out. As you can tell, he's incredibly tricky and talented. With his footwork and timing, he is considered to be the pound for pound best Nakmuay in Thailand.

Youtube any of his fights, and you'll see he pretty much goofs around and throws flashy moves without taking too much damage. It's not a fighting style that many can pull off...but I personally see that as a testament to his talent and mastery of basic techniques. 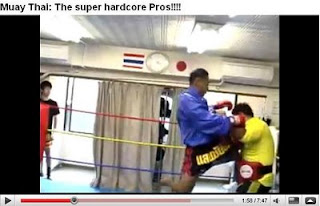 Dropped on the Internet by ThisOne at 3:25 PM 1 comment: 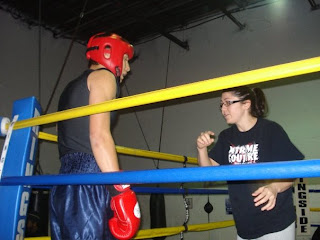 There is an upcoming spar fest at Kombat Arts on the 28th of February. Spar Fest is basically a hard sparring get together, and one can do 1 or 2 or 3 rounds. It's set up sort of like fights, but there's no winner or loser and it's friendly competition. 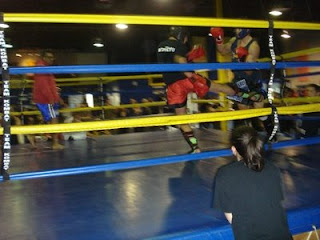 Different people from different gyms will be there. So far we have a couple guys going to represent us. If you are interested in supporting you are welcome to come. Also, if you want to participate, you should speak to Kru to see if you are ready.

Note: this is also the same day as the Blue Shorts testing. However, the test will take place in the morning and Spar fest will be during the afternoon. Also, class on that day is looking to be cancelled, and the made up on another day
Dropped on the Internet by ThisOne at 5:46 PM No comments:

Just a fight I thought I'd share from the The Champions Club promotion in Germany.

Nung Ubon (36 years old) is a veteran of the ring who has, among his achievements, multiple stadium belts and a win against Saenchai Sor Kingstar.
For more info on Nung: http://www.the-championsclub.com/magazin/artikel.php?artikel=163&menuid=22&topmenu=0

For more about TCC events go to http://www.youtube.com/user/caplinb. Other choice fights are there, including Madsua vs Suakao, and Deisellek vs Alex Schmitt
Dropped on the Internet by ThisOne at 5:26 PM No comments:

Here is the fighter Kru has suggested the fighters and the class look up: Samart Payakaroon. He is considered by many as the best muay thai fighter ever

After watching Samart, you may have noticed his hand-skill and slipping are exceptional. You should know that in addition to his legendary muay thai career, Samart had a successful stint in boxing where he won the WBC featherweight title in 1986.

Here are a few links for you to look at (not too many...do your own research). Remember what Kru said: look for his timing, and his explosiveness from his seemingly calm manner.

Vs. Gilbert Ballantine: http://www.youtube.com/watch?v=BXO8i10wVjw (note: when I posted this I thought it was an earlier fight; apparently, Samart came out of retirement for this fight)

Vs. Shirato (one of his later fights): http://www.youtube.com/watch?v=Inz2dBS8rv0

These are some entertaining ones. But he has quite a few more fights online which might be better to study for different reasons. So be sure to check those out.

Dropped on the Internet by ThisOne at 3:53 PM No comments:

Remember to speak to Kru and Poo Choi Lindor if you feel ready to take the test. And if you have already been approached by one of the instructors about it, start preparing yourself.

Here's a glimpse of YUMT @ Blue Shorts Tests of the past:

Dropped on the Internet by ThisOne at 5:12 PM No comments: