Make Up Classes this Week!

To everyone signed up for the summer, your session is NOT over! We have 2 make up classes this week: Tues Sept 1 and Thurs Sept 3!
make it out to these classes as a way to end your summer with a bang
For everyone else, we'll see you in the next semester!
Dropped on the Internet by ThisOne at 8:37 PM No comments:

Watch fights! Especially Thais.I post a lot of them here, of course. The key is to watch the pace of the fight, the timing of the exchanges and other characteristics of the fight that highlight effectiveness...You should definitely watch for all the things that you have learned from your instructors.

For me, it has been weeks since I really sat down and watched an entire MT fight. However, going back and watching the very last fight I posted here (Orono and Namkabuan), it was a great refresher on how real Muaythai style exchanges are handled. I like it because its a great way to remind me of all the holes in my own performances and where to really work on.

Whether it's returning right away after being hit, proper exchanging in the clinch or really working that teep (push kick) with correct timing, make sure you are watching fights to pick up or remind yourself of the most useful tactics used in Muaythai

Lastly, try to judge a traditional Muaythai fight. See if you can pick out the winner. It's a great exercise in expanding your knowledge of the game!
Dropped on the Internet by ThisOne at 9:59 AM No comments:

Amulets of Muay Thai: an Introduction

You've probably seen traditional fighters entering the ring with a whole bunch of stuff covering them. If you were wondering what they're called, and what they mean, here is a basic introduction. 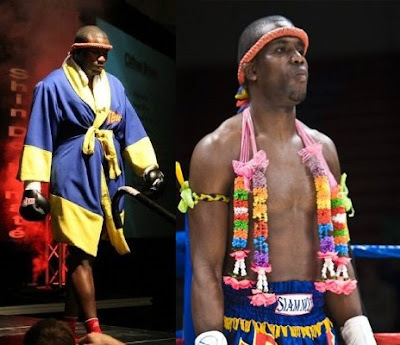 First off, the Mongkol is unique to Muay Thai, and is not used in Cambodia or Burma (which have very similar arts, such as Pradal Serey); that particular fact is from Wikipedia lol. The Mongkol is a often described as a "crown". It is a sacred (blessed by a monk) piece used to represent the gym or camp the fighter represents.
In the past, each camp had their own distinct Mongkols, but now gyms often have more than one. Fighters do not touch it; It is placed (before the fight) and removed (after the Ram Muay) by their Kru Muay. 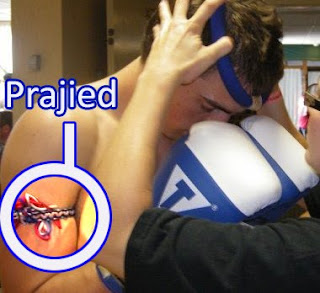 These arm bands worn around the bicep are meant to protect the fighter from harm. They are worn throughout the whole fight. They are given to the fighter by friend, family etc
Dropped on the Internet by ThisOne at 9:36 PM No comments:

A fight between two legends: Orono the "Black Super man" (I'm not kidding...I read that they actually called him that) and Namkabuan the "Ring Genius" 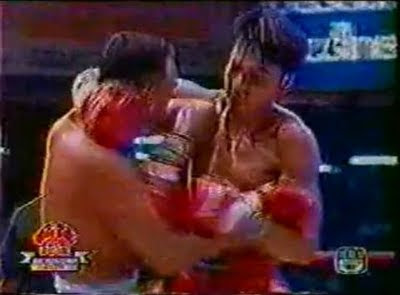 By the way...for anyone that's actually followed this blog and the fighters I've posted- Here's pic of the two Oronos so you can tell them apart:

I came across that picture on google when trying to get pictures for both fighters featured in this post.
Dropped on the Internet by ThisOne at 8:26 PM No comments:

Conversations with a Master

Many of you in class may not know Poochoi Kru Nick Bautista.

He's a hard working student of Muaythai and has been nice enough to share some very interesting materials with us!

and 2 very interesting conversations he has had with none other than Ajahn Suchart:

Thanks for sharing, Nick!

Keep checking his site for more
Dropped on the Internet by ThisOne at 11:53 AM 1 comment:

Thought I would post up a female fight. I actually have trouble finding clips of women's muay thai of good-quality. Admittedly, I don't know alot of female fighters outside of the ones Kru has sent my way to watch...hopefully that'll change and I can post up some more strong female fighters

If you haven't heard of Germaine, you've definitely heard of her now. 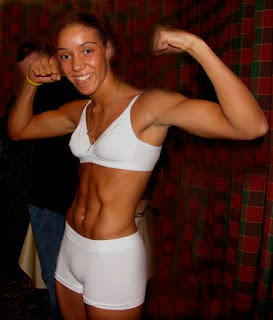 Dropped on the Internet by ThisOne at 10:16 AM No comments: 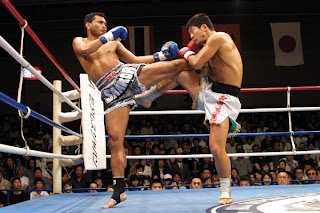 Samkor was one bad mother shut-your-mouth in his prime. A famous Southpaw who could win fights with left leg alone, he also had some great elbows. Watch the highlight video...he just moves guys with that one kick.

However as of late, Samkor's been facing younger guys...and he's not exactly in tip top shape like he used to be. He's had mixed results

For more: Search youtube...or go to the "related videos" box in the highlights. It's not hard to find Samkor on the net
Dropped on the Internet by ThisOne at 10:52 PM No comments:

Not long ago, PooChoi Kru Mikey from our friends of Southside Muay Thai asked me who my favourite fighter is. I didn't have an answer at the time, merely replying, "there are too many".

Reflecting on it a bit, the answer right now would have to be Namkabuan. Namkabuan was a very versatile and intelligent fighter, who could fight with both craftiness and aggression.

They called him the Ring Genius. I like that he was able to power through an dominate some opponents, and then use his movement and timing to counter when facing stronger ones.

Namkabuan eventually left the ring after a scandal...something about him being suspected of throwing a fight. I do not know the details, but it makes me appreciate all the fights I have found with him in them.


In this particular video, he's fighting Therdkiat, who was also renowned for his versatility.

Therdkiat demonstrates why he was called the Tactician in this fight, and dishes out some great elbow techniques. I have not seen many of Therdkiat's fights, but I may have to go look for some more after seeing the kind of fight he gave Namkabuan.

*grammar freaks: I realized that when I went back to edit what I've written, I screwed up the tenses. I'm too lazy to fix it now*
Dropped on the Internet by ThisOne at 12:46 PM No comments: Kaolan is either a former Lumpinee or Rajadamnern champ. Maybe both. I don't know for sure but I know he has at least one of those titles. He was the first Thai competitor in K-1 MAX (before Buakao!).

Rambo is a pretty well known fighter as well...again I have no idea what titles he has. Never the less, searching him up will bring you some good stuff.
Dropped on the Internet by ThisOne at 6:41 PM No comments:

Sakmongkol and Jongsanan Go at it Again 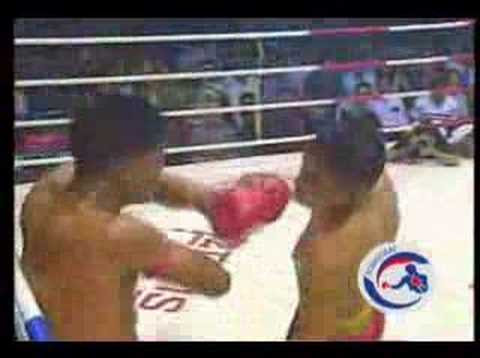 You may remember a post I made about Sakmongkol Sitchuchoke and Jongsanan Fairtex. I posted one of their many battles. Here is another that you probably have not seen

Watch: http://www.youtube.com/watch?v=SmGjKDn_DhE&feature=channel_page
Dropped on the Internet by ThisOne at 4:41 PM No comments:

Someone posted this on my profile of Yoddecha Sityodtong:

Cool interview with the champ from SG Pro- Fight Community

Dropped on the Internet by ThisOne at 12:09 AM No comments:

http://www.youtube.com/watch?v=X3eUAb1kAHg&feature=channel_page
Dropped on the Internet by ThisOne at 10:34 PM No comments:

For some reason, somebody thought it appropriate to put bonafide Muay Thai champ Anuwat Kaewsamrit into an amateur Wushu tournament (First Asian Martial Arts Games). To the organizers of this event...SERIOUSLY? It may not be Muay Thai but Anuwat's a world class scary ass striker none the less.

Here's a brief video at what happened: http://news.mcot.net/sport/inside.php?value=bmlkPTM0MjkzJm50eXBlPWNsaXA=

Who thought this guy should be fighting amateur Sanda guys? lol
Dropped on the Internet by ThisOne at 11:28 PM 1 comment:

For your viewing pleasure:

Dropped on the Internet by ThisOne at 3:18 PM No comments:

I don't know how many of you actually keep up with the MT scene in Thailand, but for now I'll continue to post up news of interest from the East.

According to Muaymag.com, Saenchai Sor Kingstar (arguably the pound or pound best Muay Thai fighter in the world) is looking to quit fighting soon...at least at home.

He has expressed interest in picking up fights here and there overseas and, more interestingly, play some football (soccer) with the Muangthong Nongchok team in Bangkok

To be quite honest, unless he starts giving up ridiculous amounts of weight, I think Saenchai will probably walk through most of his overseas opponents until he really starts getting too "over the hill" for fighting.

If you have never heard of Saenchai, go look him up! I posted a video or two of him on the blog too
Dropped on the Internet by ThisOne at 12:34 PM No comments:

Sangtiennoi Sor. Rungrot was one of the most famous fighters of his time. He was known as the "Deadly Kisser" for..um, kissing his opponents. Yeah...

He's gone on to fight past his prime against much younger opponents, and eventually moved on to training great fighters like Samkor and John Wayne Parr

To be honest, as a fan, I'm not incredibly impressed by Sangtiennoi compared to the other fighters of his era. I'm sure a lot of Muay Thai enthusiasts will crap on me for saying that. However, he is still one of the greatest, with precise strikes and a methodical fighting style.

For more info on the Deadly Kisser: http://news.axkickboxing.com/article?id=118

Vs Ramon Dekkers: http://www.youtube.com/watch?v=zSKvpFKfB5o
Dropped on the Internet by ThisOne at 11:35 AM No comments: