We are CLOSED ON SUNDAY AND MONDAY (AUG 1st AND 2nd)

Enjoy your weekend!
Dropped on the Internet by ThisOne at 9:37 AM No comments: 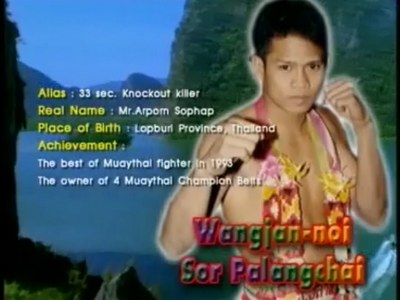 Wangjannoi was one of the most successful fighters coming out of the Golden Era of Muay Thai. He has beaten a who's who of the fighters active during his time: Samart Payakaroon, Nampon and Namkabuan...etc etc.

Watch: http://www.youtube.com/watch?v=EtS7NLcGqfU
Dropped on the Internet by ThisOne at 10:58 AM No comments:

Dropped on the Internet by ThisOne at 11:26 PM No comments:

We are looking to hire a part time office assistant at York Muay Thai. Roughly looking for 3 days a week. Preferably Tuesdays, Thursdays and Saturdays. Candidate must have great social skills, organizational skills and computer/clerical. They must also be able to be a part of a kick ass team!

Please send your... resume to info@yorkmuaythai.com to Kru Jenypher's attention.

Please no phone calls.
Dropped on the Internet by ThisOne at 12:48 PM No comments:

Ajahn Suchart came to bless our shrine at York Muay Thai, as well as Kru Jen and all the students.

Photos by Sandeep Sandhu (click to enlarge each photo) 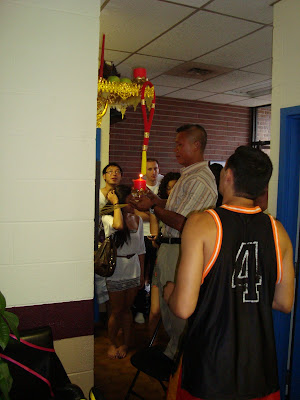 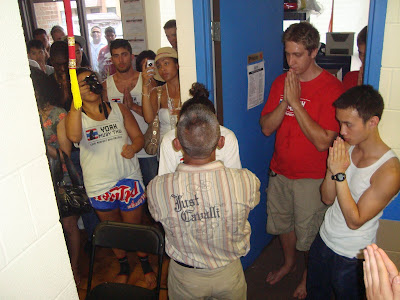 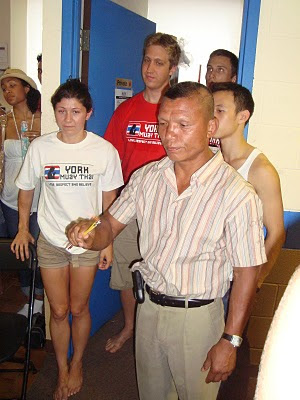 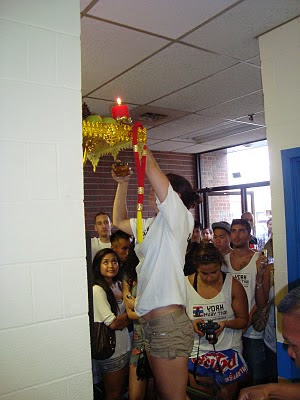 Dropped on the Internet by ThisOne at 1:11 PM No comments:

Dropped on the Internet by ThisOne at 12:36 PM No comments:

Dropped on the Internet by ThisOne at 11:06 PM No comments:

YMT at the weigh ins

Dropped on the Internet by ThisOne at 12:10 AM No comments:

I know most of you won't get to see videos of our trip very soon, so I will give you a bit of a write up on the fights we had over the weekend. I also don't wanna repeat my stories too much.

A lot of our guys fought very close together, so I didn't always get to see everyone's fight in completion, so some of the details will be fuzzy. I also don't always remember things right.

Obviously I'll have more on my fight...so here we go

First up was Leo on Saturday. I actually missed this fight because I was warming up with Ruth from Krudar while Kru cornered our fiery Mexican.
Apparently Leo came out calm like he always does, while the other guy rushed toward him. Leo controlled the pace and gave him a bloody nose.
From what I heard, he backed off a bit on the guy when he had him, and could have finished it earlier, but his opponent would not come out of the corner after the second round.
Leo wins by TKO

Serge was up next very soon after. He started with some kicks but as soon as his opponent started to tag him with a couple punches, Serge grabbed for the clinch. From there it seemed like the other guy didn't know what to do, as he tried to block the knees with his arms.
Serge pretty much continued to knee both side and straight for most of the fight. Towards the end, he let go and tried to end it with punches, but a KO was not to be.
Serge wins by U.D.

My fight....round one I noticed right away he had a traditional style, and I was happy. If it's a game of timing and technique instead of brawling, I'm always game to play. He threw mostly jabs and teeps, but I started getting the end of the exchanges some inside and outside low kicks. My hands started to find their target too. He initiated clinch, and although I could trade knees with him he was very strong and threw me. I played a bit with my kicks going low inside to middle body. It was a good round for both of us.
Round two started off very similar. He started throwing more teeps with good timing. I caught maybe half of them, but he teeps like me, and made sure he threw it as I moved in. His eyes are good. He even got me as I went to throw a kick and it sent me flying back. I landed a little bit more hands, catching him with a hook-cross to the chin.
We started to clinch and he found a good target for his knee which took my breath out of my body. I got an 8 count and immediately after I got up he rushed in and hit my weakened side again. I got another count. In a last ditch effort to avoid the last crucial count, I tried to teep him, but we ended up clinched again. We started to trade knees hard. I could hear him grunting as he put everything into each one, and I grunted right back as I tried to return with my own knees. I then tried to separate with a cross face but he found the target for his knee again and hammered it in...dropping me for the last time.

He was a very respectful and talented kid, and it would be cool to do it again with him one day. He was also Canadian, so I hope he took home the belt

PC Brian was up next. Bri opened up with some hard kicks, but the other guy was landing with some boxing.
The first two rounds I remember being very similar. Bri threw some good kicks, but the guy would catch and sometimes get a sweep...at times it looked like he was tripping Brian but I can't remember.
In the last round Brian turned up the heat. He threw a body hook from hell that echoed throughout the room...it was straight out of Rocky. It looked sooo painful
Then he started to clinch knee. His opponent started to block with his arm, showing he didn't know how to handle it. Bri continued to dig the knees in like he was doing pads on a good day, but he lost a decision.

Arash came out and fought after a long wait. The first round was a lot of clinch, with Arash having some trouble separating for knees.
Arash came out with some kicks and side knees in the second round, and it started to become more clear that he was doing a lot of damage.
In the third, the other guy tried to land consecutive some kicks but Arash would counter teep him hard each time, showing some skill and timing. By the end of it, they had clinch up again and Arash continued to dig that side knee in deep.
Arash wins by U.D.

Leo's second fight was not an easy one at first. The guy came out swinging and had Leo moving back at times. Leo started to respond with some hard low kicks, and then went to land his own hands.
As the fight went on, the two of them nut sacked each other a few times, proving that a steel cup really is essential
Leo eventually found a target for his knees in round 2 and went to town as the guy started to double over. He ended up getting an 8 count.
Towards the end, the other guy really wanted it bad and came forward to slug it out, but Leo hung in there and finished the fight
Leo wins by U.D.

Serge fought a guy who Kru nicknamed "Malfoy" (he really does look like Malfoy). I remember this fight being like his first fight. Serge eats some punches, but isn't fazed and moves in to knee like no tmrw.
In the third, it looked like Serge dropped him but there was no count.
By the end of the fight, Serge's head gear was slipping off but he could give a rats ass and wanted it so bad he just kneed until the bell
Serge wins U.D.

Leo's final fight was pretty exciting. Now that I think about it, I can't remember it too well...
I remember Leo's knees playing a big role as he would catch the guy in the clinch plahm hold. The other guy really turned it up though and started to uppercut a lot. Leo blocked nice and tight to weather the storm, and then would move in with his own punches until he got close enough to clinch and knee.
It was a tense exchange, and the other guy really tried to take Leo's head off, but York's first student champ was born after the decision
Leo wins by U.D. and is 2010 light welterweight novice champion

Arash's fight was a little worrying at first. His opponent started to land good hands, but Arash would counter well with his teeps and kicks. He seemed a little hesitant at first, but then started to throw some head kicks into the mix.
As the fight wore on, they started to clinch and Arash's knees would come close to the guy's face as he bent his body. Afraid that he would lose points for knees to the face if his opponent would continue to bend, Arash and Kru agreed to show skill in clinch throws instead.
For the rest of the fight, Arash would toss his opponent to the floor from clinch.
Arash wins by U.D. and is the 2010 middleweight novice champion

Serge was the last fighter before we had to catch our flight. I ended up missing this entirely as I ran to get our luggage ready to go.
From what I heard, Serge's opponent actually out clinched him at first, but Serge stayed calm.
In rounds 2 and 3, Serge started to get the better of the clinch and kneed until they'd give him the belt so he could go home and make his flight lol
Serge wins by U.D. and is the 2010 super welterweight novice champion

A big thanks to our team, families and friends for their loving support!

All our opponents were great people and class acts. It was an awesome weekend.

PS. Mike Durst has a lot of pics and vids on his camera...so we will get those up when he returns
Dropped on the Internet by ThisOne at 11:03 AM No comments:

Article by Alexandra Posadzki
Read: http://www.thestar.com/living/article/830651--thai-fighter-busts-into-the-boys-fight-club
Dropped on the Internet by ThisOne at 10:15 AM No comments:

Click to enlarge...congrats Fu! We'll miss you for those 2 years!

Dropped on the Internet by ThisOne at 11:15 PM No comments:

Muay Thai Shorts are in!

We now have Yellow and Blue shorts available at the gym, both in Satin and Vinyl material!

Satin is the shiny kind, and Vinyl is the lighter material. Pick up yours today!
*shorts have Muay Thai script on the front, plus "York Muay Thai" and "Canada" on the sides*
Dropped on the Internet by ThisOne at 11:34 AM No comments:

This fight was under K-1 style rules: no clinch, no elbow, kicks to the arms do not score

Slamm normally promotes Full Thai rules bouts in the Netherlands featuring some of the best Thais against strong Dutch contenders; however, Andy being a K-1 fighter and Yod having fought k-1 before/being a possible K-1 prospect are no doubt reasons for this "different" fight.

Although the scoring system definitely favors Andy Souwer, you really get to see Andy adjust to and deal with Yod's powerful kicks. Most people don't seem to know what to do when Yod kicks them, but Andy shows world class skill by responding and countering those monster legs and making the fight a tough one.

Watch: http://www.youtube.com/watch?v=th_18pAeo38
Dropped on the Internet by ThisOne at 1:33 AM No comments: