Get ready for the WKF's inaugaral Muay Thai event in Ontario...

and PCC fights Andres, a two time TBA tournament champion, from Alliance AZO all the way in Kalamazoo:

Come out and support! The show only has a few tickets left... YMT officially has none but you might be able to scrounge some up from other gyms!

Dropped on the Internet by ThisOne at 1:54 PM No comments:

York Muay Thai team repping strong at Southside Muay Thai's event. Congrats on a great card SS, and thanks to all of the YMTeam that made it out to support!

Dropped on the Internet by ThisOne at 11:42 PM No comments:

York Muay Thai athletes demo at Undisputed Martial Arts 5th year Anniversary Party from Saturday September 20, 2014. Conrgrats to Undisputed on their 5 years and thanks for having us. The event was very well run and it was a pleasure being a part of it. 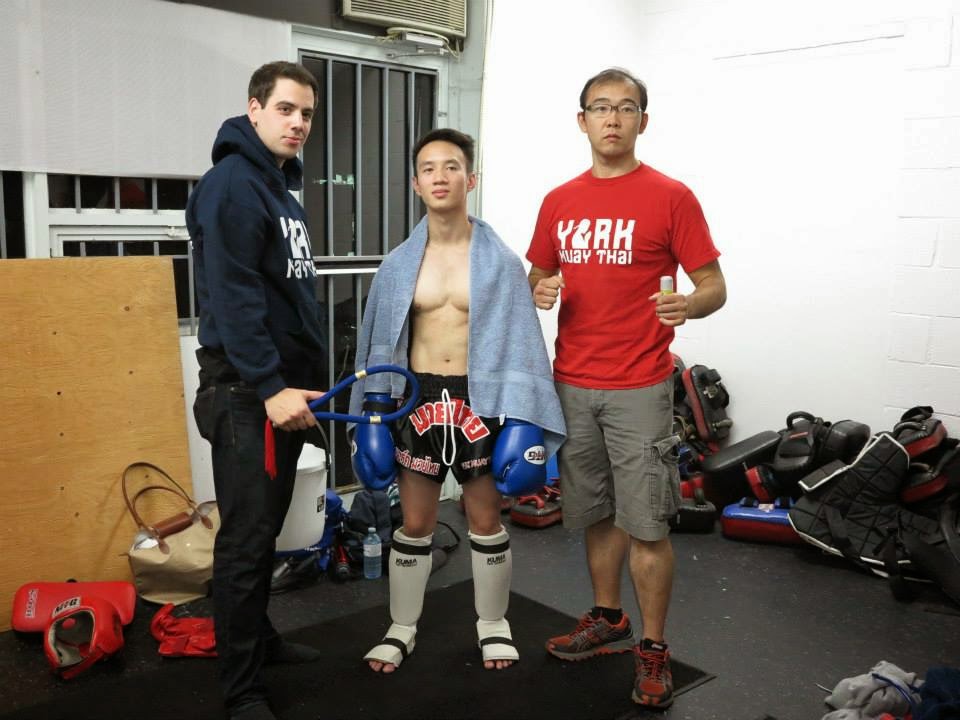 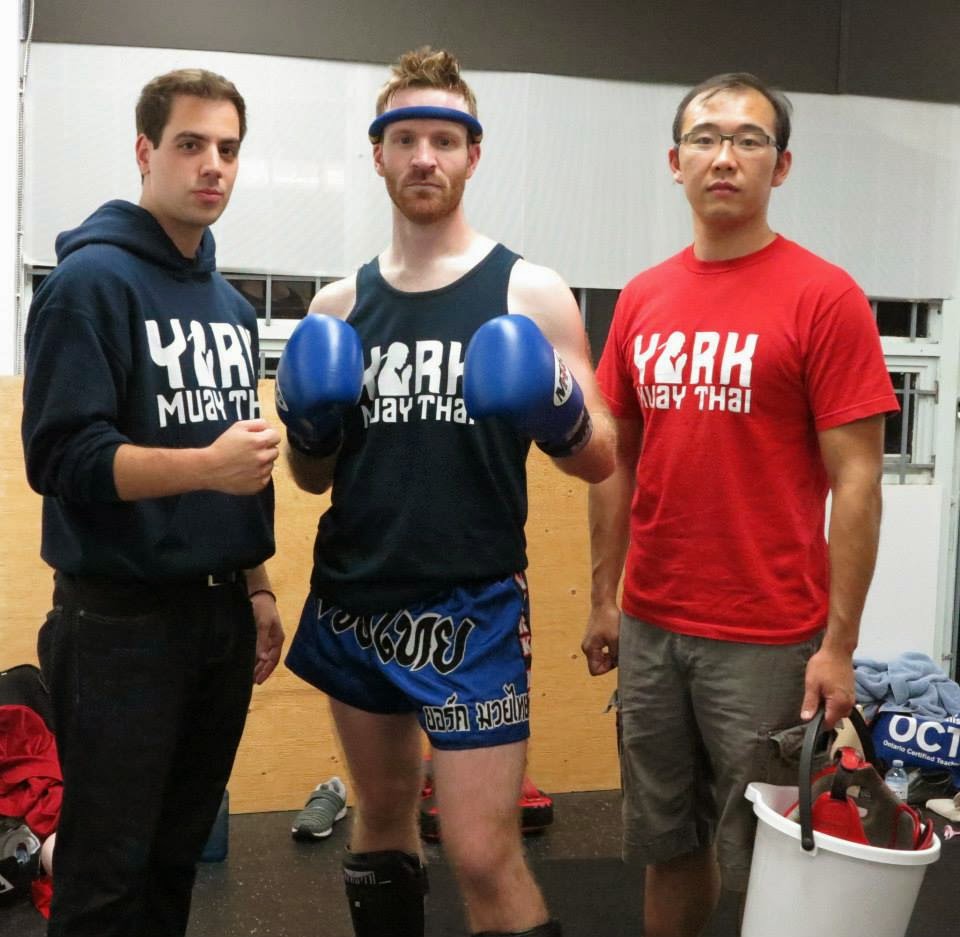 Dropped on the Internet by ThisOne at 8:03 PM No comments:

Lester, Kumar and Vlad- Welcome to the Next Step! 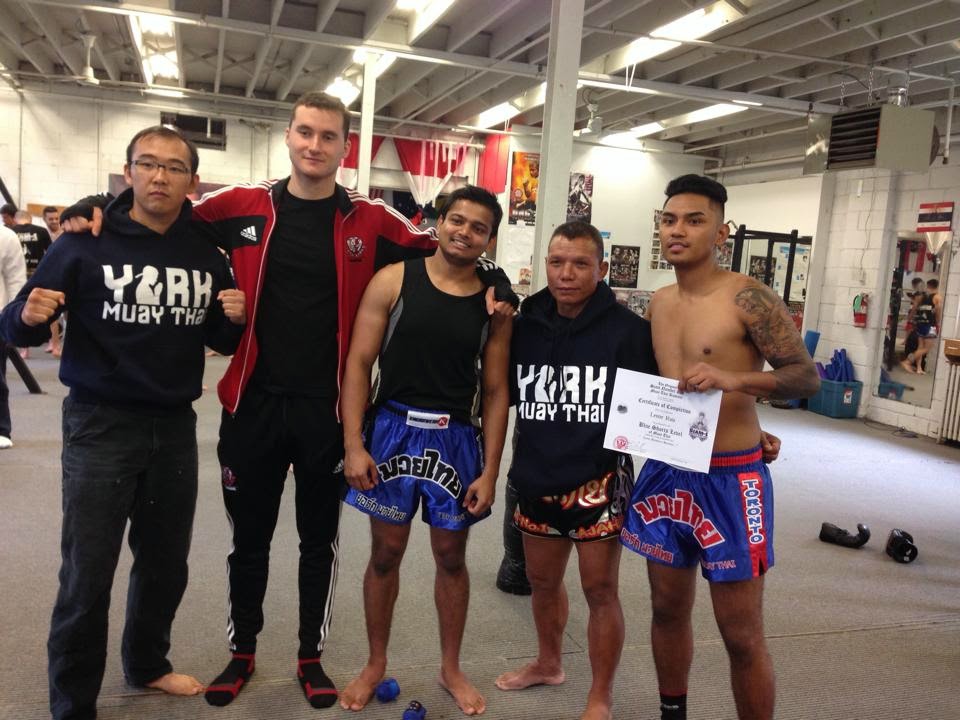 We would like to congratulate our next set of intermediate trainees in Muay Thai!

Instructors at YMT nominate our students to continue to the next level if they demonstrate high averages among the following criteria:  1. dedication/commitment, 2. technical competency in the basics, 3. respect for the culture of our gym and it's students,  4. physical conditioning.

Boys, this is not an achievement, but an opportunity. We are proud of how hard you have worked thus far and are excited to see what you do with it.


Dropped on the Internet by ThisOne at 6:03 PM No comments:

Here it is, in true to YMT blog fashion.

Buakaw is one of these most well rounded full Muay Thai fighters in the world, and as of late he's been just taking guys a part with every weapon in the book.

So while I post this for you to see some super sharp knee work (both as offensive manuevers that we've worked in class, and as defensive returns/counters), you'll get to see him once again put on a clinic using an array of strikes and movement. Try to look for what you've learned in training...but also don't forget to enjoy!!

Dropped on the Internet by ThisOne at 5:34 PM No comments:

Here are two fights where knees played a prominent role in the overall story line of the battle. Even more interesting is that these are fights that took  place under K-1 and Glory events. These are kickboxing events with limited/no clinching or elbows, meaning that knee work is limited to specific ranges and uses.

In this video, you can see Aikpracha, the "hitman". He is known for his absolute ferocity and aggression, and likes to let his elbows go. In this fight, you see a lot less of that aggression as he has never fought under these limited rules before. By the second round however, he really starts to use his knees both defensively and offensively. In both cases, he is successful because he finds the range of his knee and executes it at the right time. This is possible because he has trained to the point of absolute familiarity with his knee technique, and can apply it confidently when his opponent is in the correct distance. Finding the range of a knee is not the easiest thing to do, but allows you to use an incredibly powerful weapon.

While Aikpracha still seemed uneasy with the different style of fighting, his understanding of his range kept him in the winning column. It's important to realize that this kind of understanding can only come from constant drilling and refining of the basics.

In this fight, you get to see the famous Buakaw. He uses a combination of head movement, swing kicks and knees to respond to the aggressive punches of his opponent. Instead of fighting fire with fire, Buakaw uses water. His flow allows him to redirect his opponent's aggression into his own attack.

Buakaw's knees in particular are well timed, which is even more so visible here than in the Aikpracha fight. He is able to read the commitment of his opponent and make them fall right into the spear point of his knee.

Again, constant drilling of the basics and actively seeking to refine them are the keys to gaining this type of skill. When the tool is sharp enough, one's mind is less preoccupied with how to perform the technique and instead focus on WHEN.

Ask any fighter though...the tool can never be sharp enough. We want to make sure that we continue to build upon both our base techniques and our skills. Come sharpen up on some timed knees for the rest of the week at YMT!

Dropped on the Internet by ThisOne at 11:00 AM No comments:

York Muay Thai took the opportunity to visit Ajahn Chai, a renowned instructor in the U.S., and learn from him this past weekend. It was a great seminar with lots of things for us to add to our Muay Thai tool boxes!

Dropped on the Internet by ThisOne at 12:29 PM No comments:

York Muay Thai hit up the York University's first football game of the semester to give the campus a taste of what we love...Muay Thai!

Students and game watchers got to put on the gloves, learn the basics and smash some pads! We had a lot of fun working with all the different faces and introducing them to what we do.

Got to see some old friends as well as meet many new ones! A beautiful day for Muay Thai and sports :)

Even the York U Lion got on pads...PC Construction giving it some work!  Ohhhhway!

Dropped on the Internet by ThisOne at 11:21 PM No comments:

I am on my way to Arizona and will be missing our next four S and C classes (Sun 7, Mon 8, Wed 10, Sun 14) in order to fulfill a requirement of my Masters Degree. I will be learning lots of relevant things to help you as athletes, so I am excited for how this will help our school long term.

There will still be group lifts at standard times, where you will be expected to coach each other as you have to date. PC David Kim, PC Patrick Wallace, Ilir Serbo and of course Kru will be around to help with implementation and to let you know of any changes while I am gone. Happy training and be sure to ask me any questions over the next few days before I disappear.

Dropped on the Internet by ThisOne at 9:12 AM No comments:

YMT does Vanier College at York U!

On Tuesday Sept 2, we had the privelege of presenting our art, Muay Thai, to the frosh students of York U's Vanier College.

Thank you to Rodney and our own Ilir Serbo for giving us the opportunity to perform for and speak to your students.We hope they were inspired and took home the core message of our presentation: to keep searching for what it is you are truly meant to do, and learn as much as you can from each experience a long the way.

Have an amazing year, Vanier! Hope to see you soon :)

Dropped on the Internet by ThisOne at 9:07 AM No comments:


A group photo from Alexei's last sparring session before law school. See you on the other side my friend!

Dropped on the Internet by ThisOne at 9:06 AM No comments:

Last swing kick KO vid. Posted this one before, but it got taken down. Here's another upload of it!

Dropped on the Internet by ThisOne at 10:15 AM No comments: