In case you missed it, here are all of York Muay Thai's highlights for the 2014 year!!  Everyone have a safe and amazing New Year. We are closed tonight and tomorrow (31st and 1st), and look forward to seeing you again Friday (the 2nd)!! 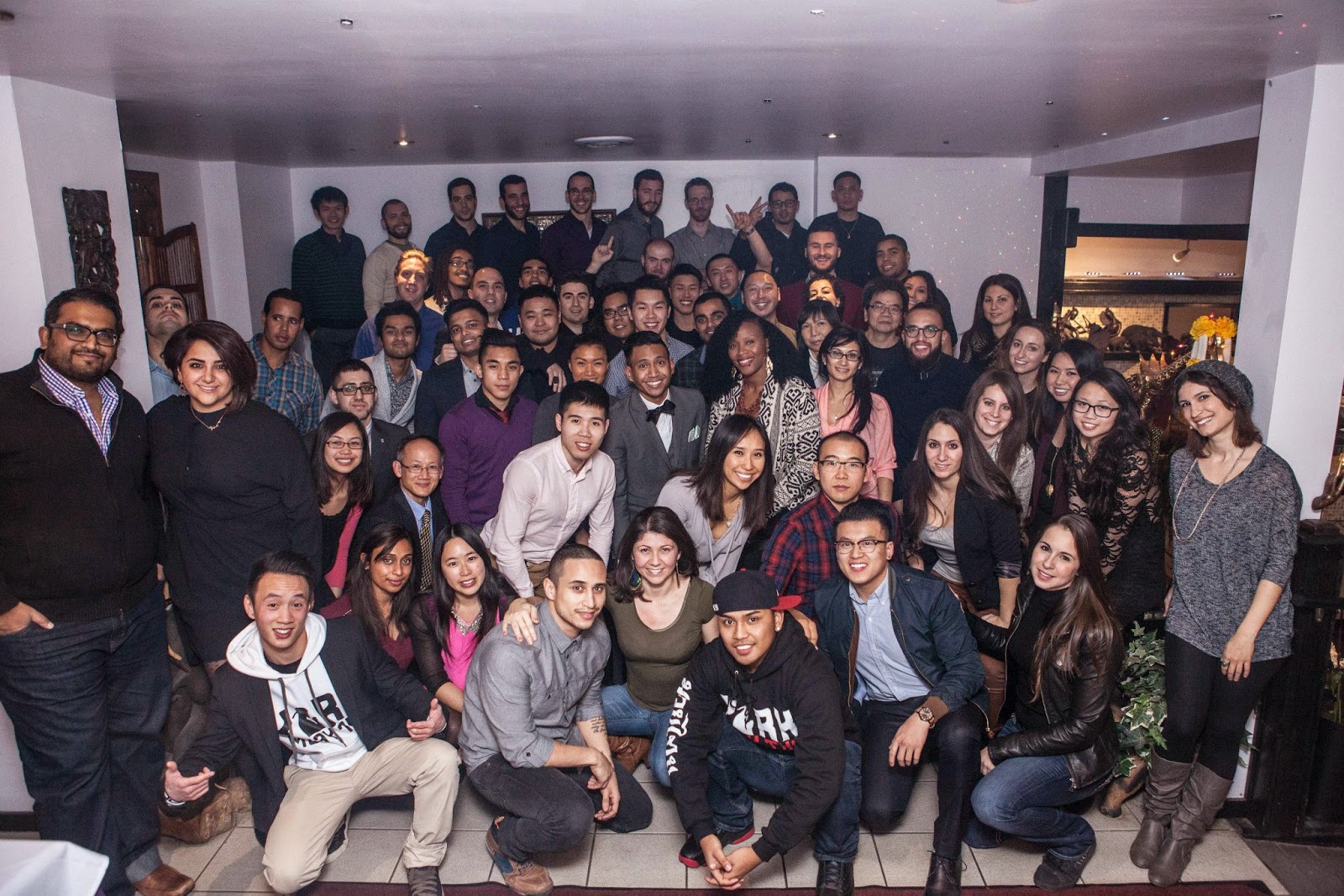 Thank you to everyone who came out and made the night special!!

On Dec 21, YMT headed to Young Thailand on Parliament street and had the annual holiday dinner and celebration. Young Thailand is a venue far out of the gym's neighbourhood, but it is also a part of Muay Thai Ontario history. Many years ago, Ajahn Suchart began training some of his first students in the basements of Young Thailand.

We brought ourselves back to the beginning, celebrated all of the moments of the year, and looked confidently towards the future together!

Congratulations to our students for the following awards:


Amir Khaltish: Most improved junior student of the year 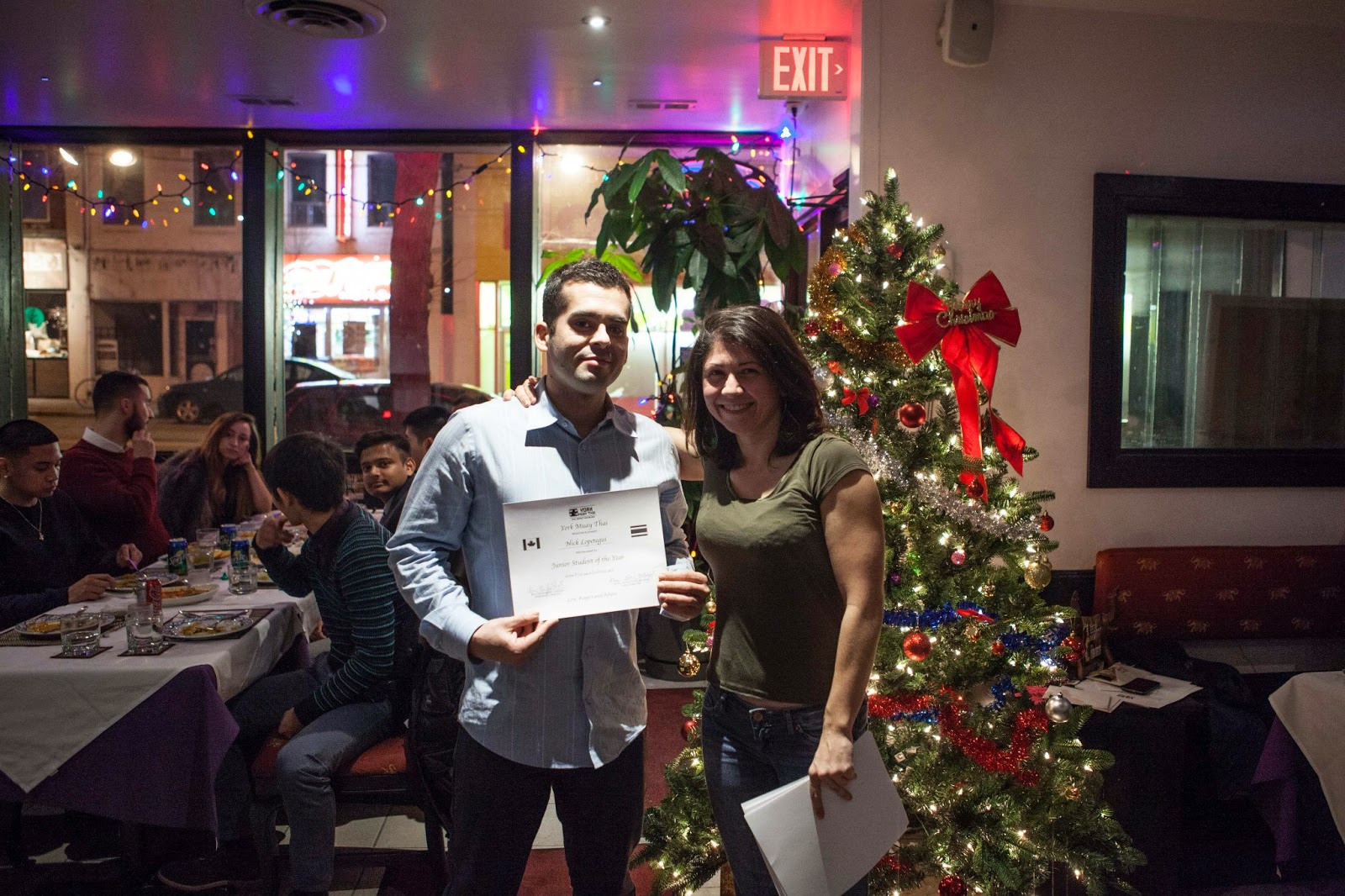 Vlad U: Most improved senior student of the year 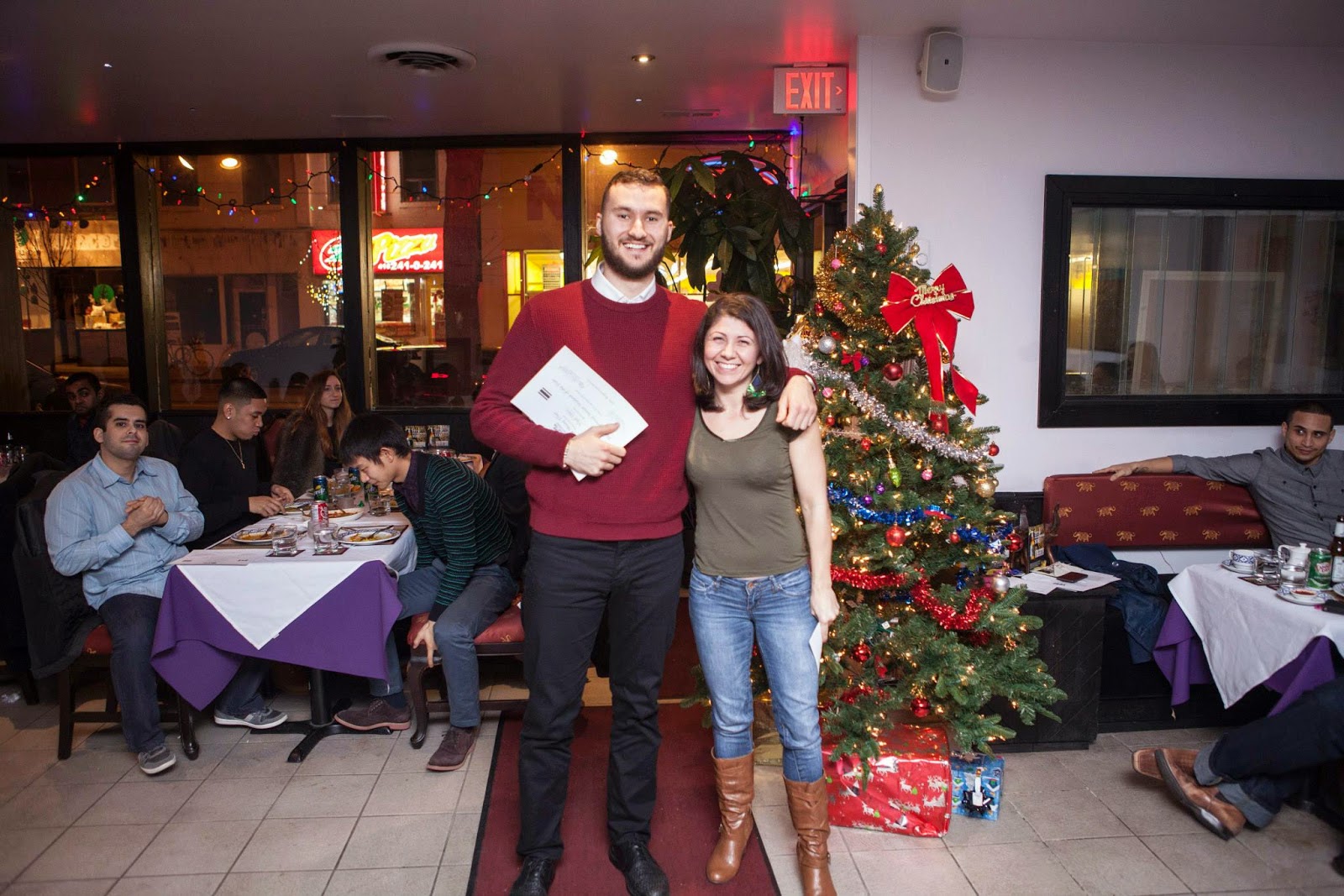 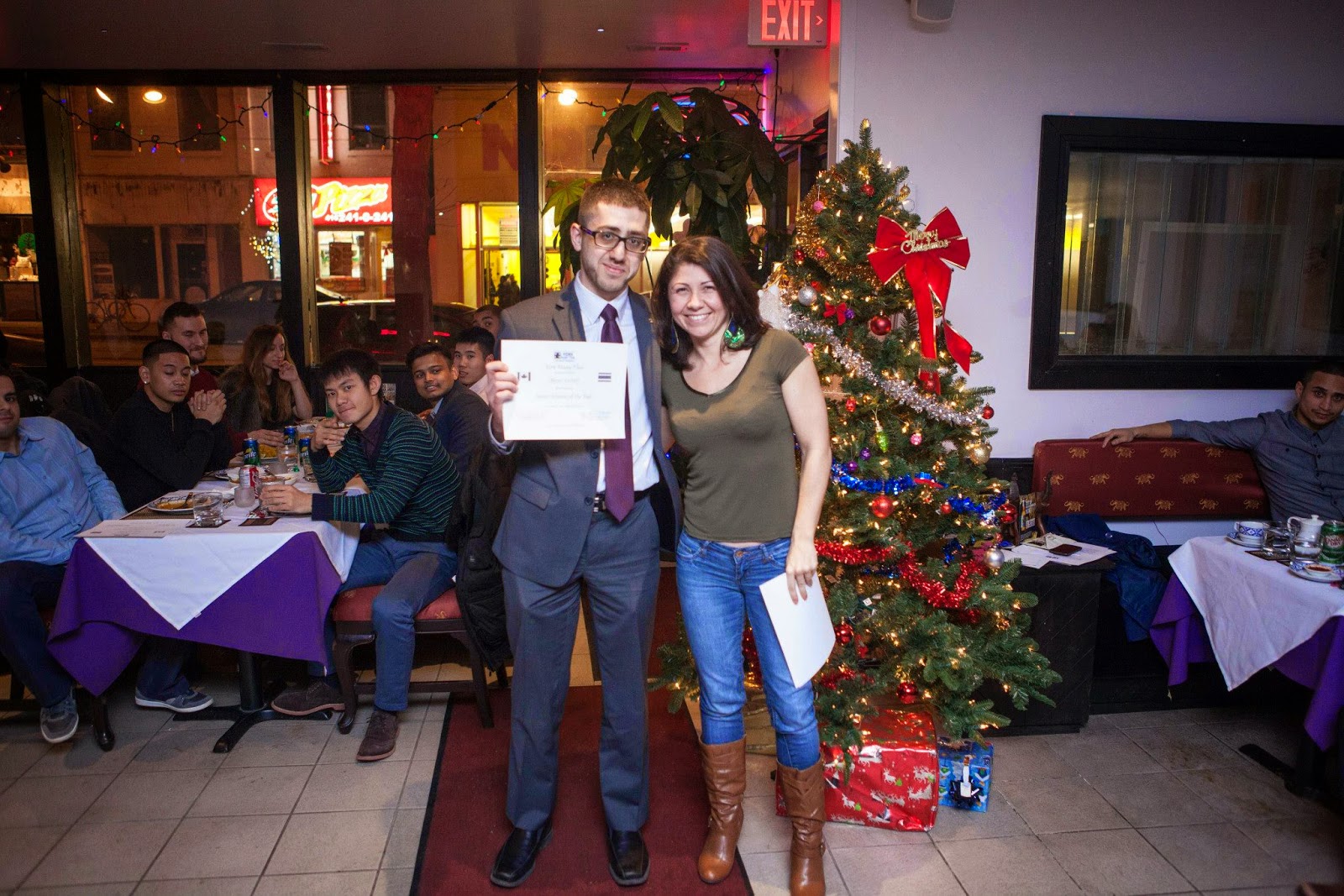 Mike Zhang: Fighter of the year 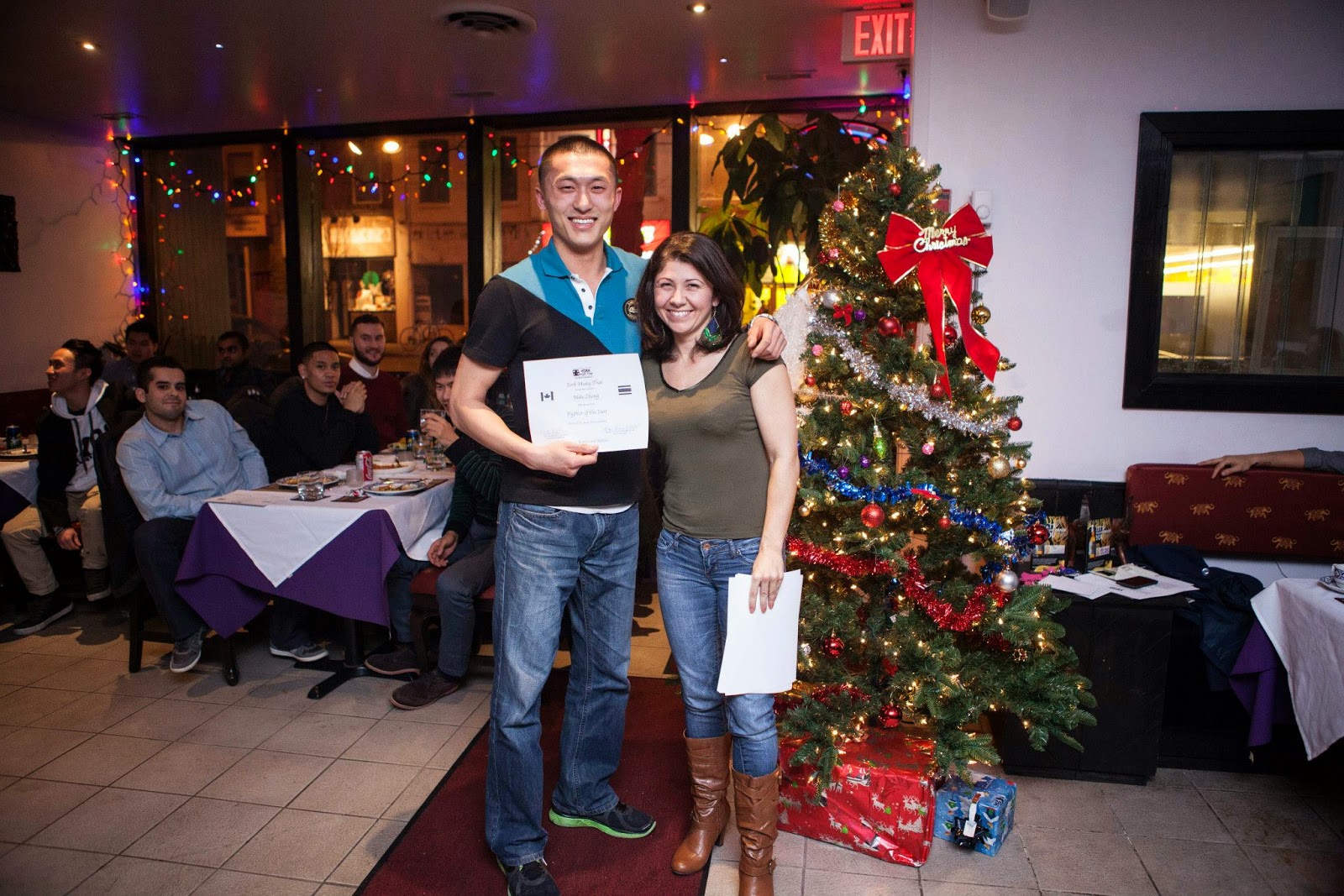 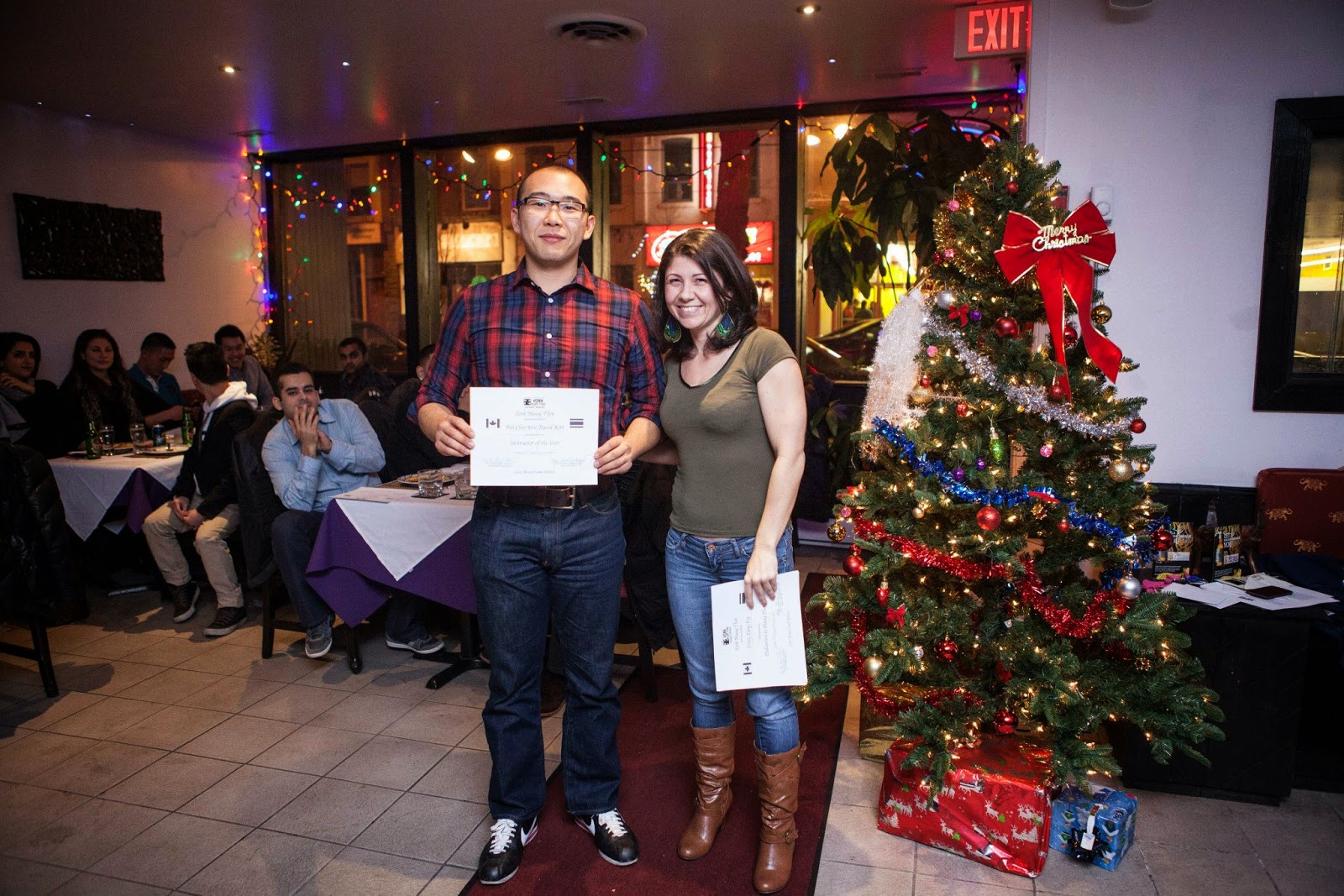 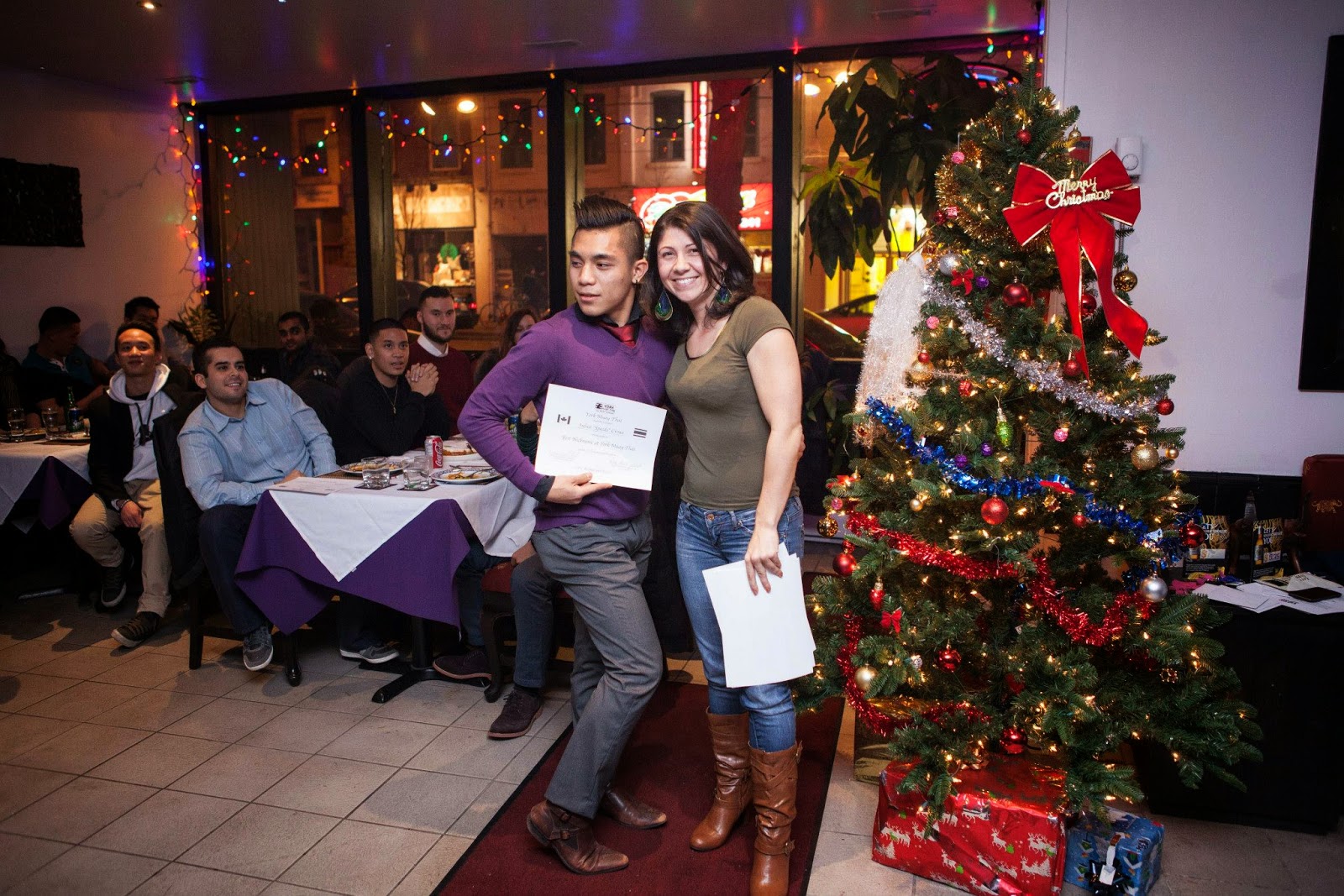 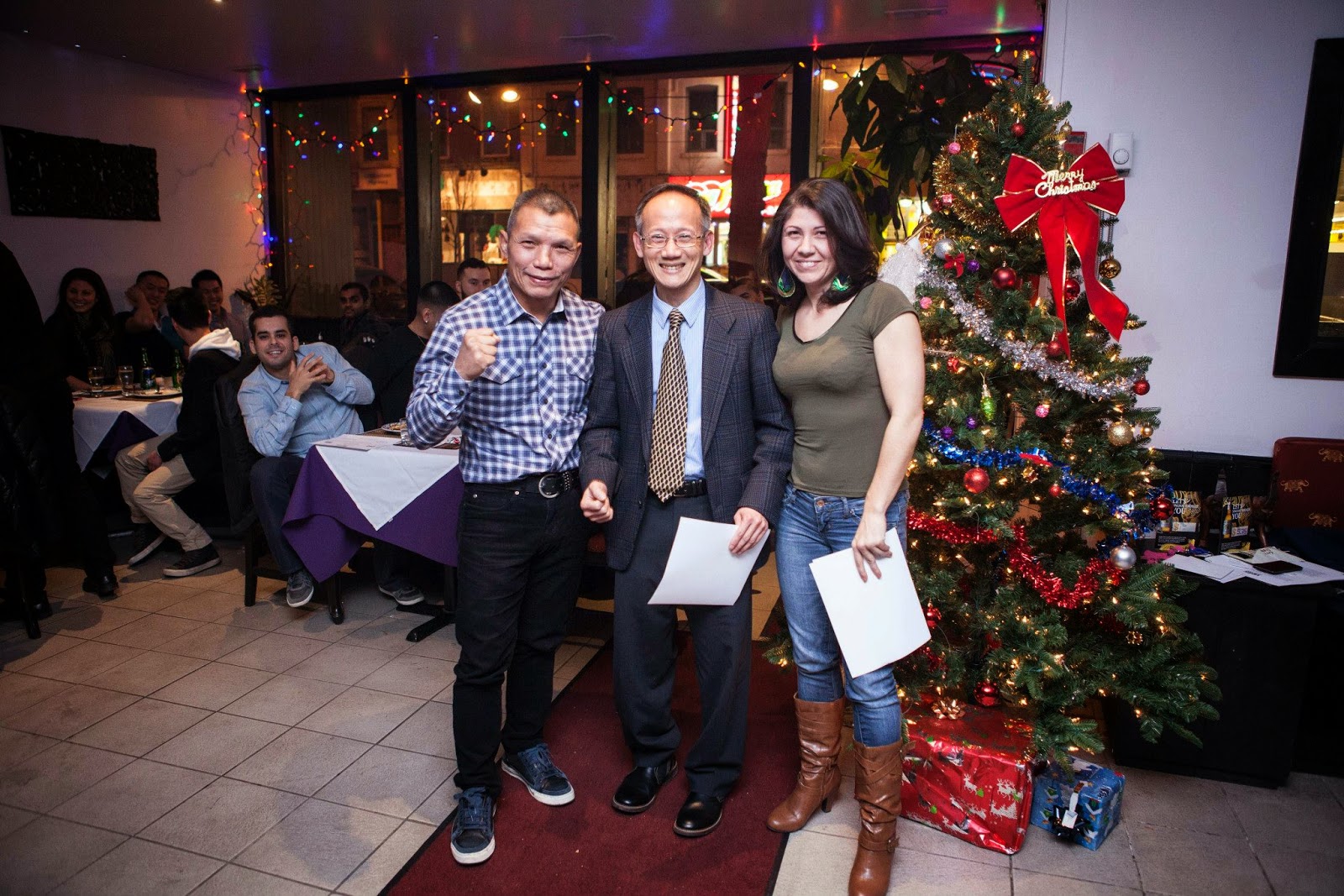 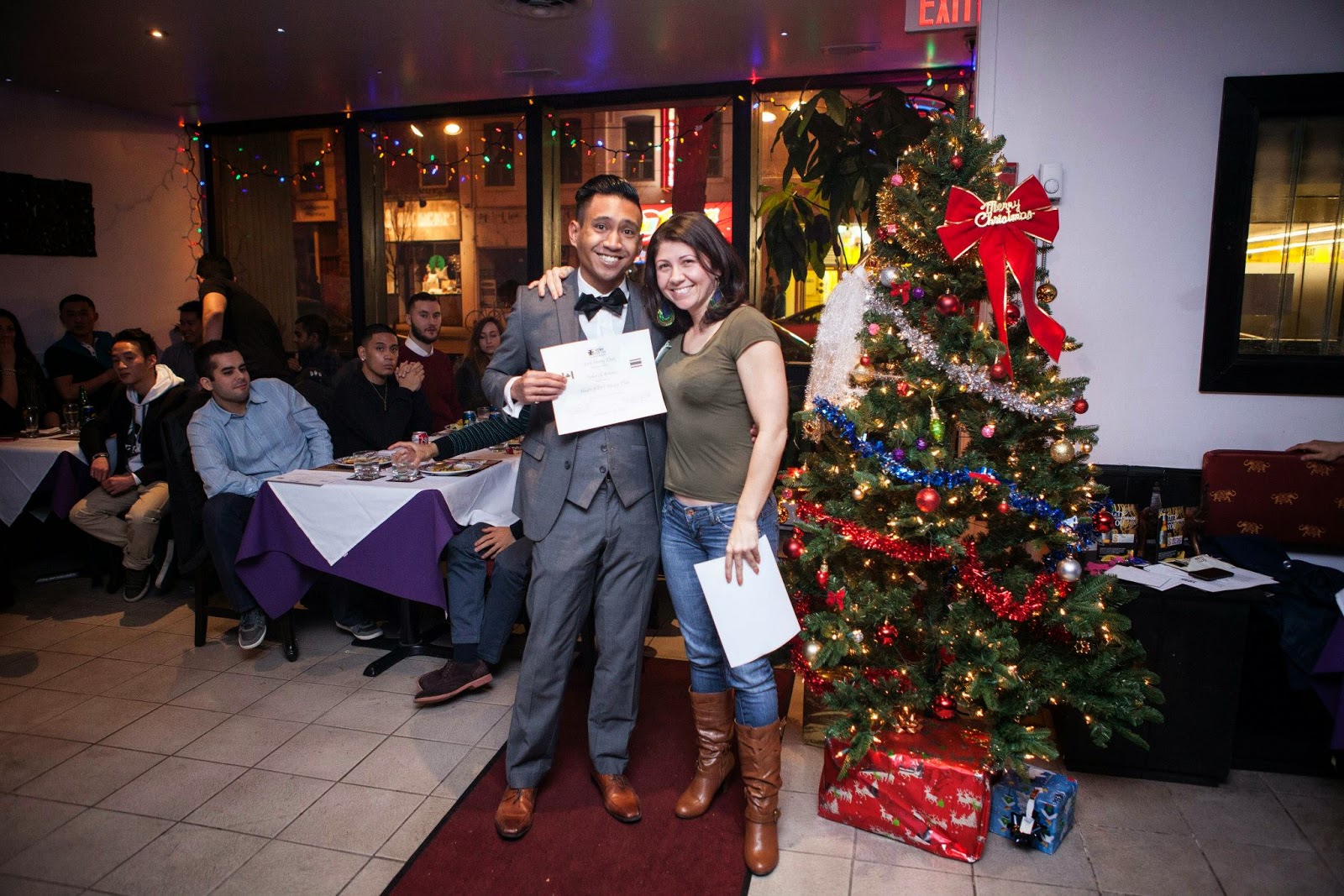 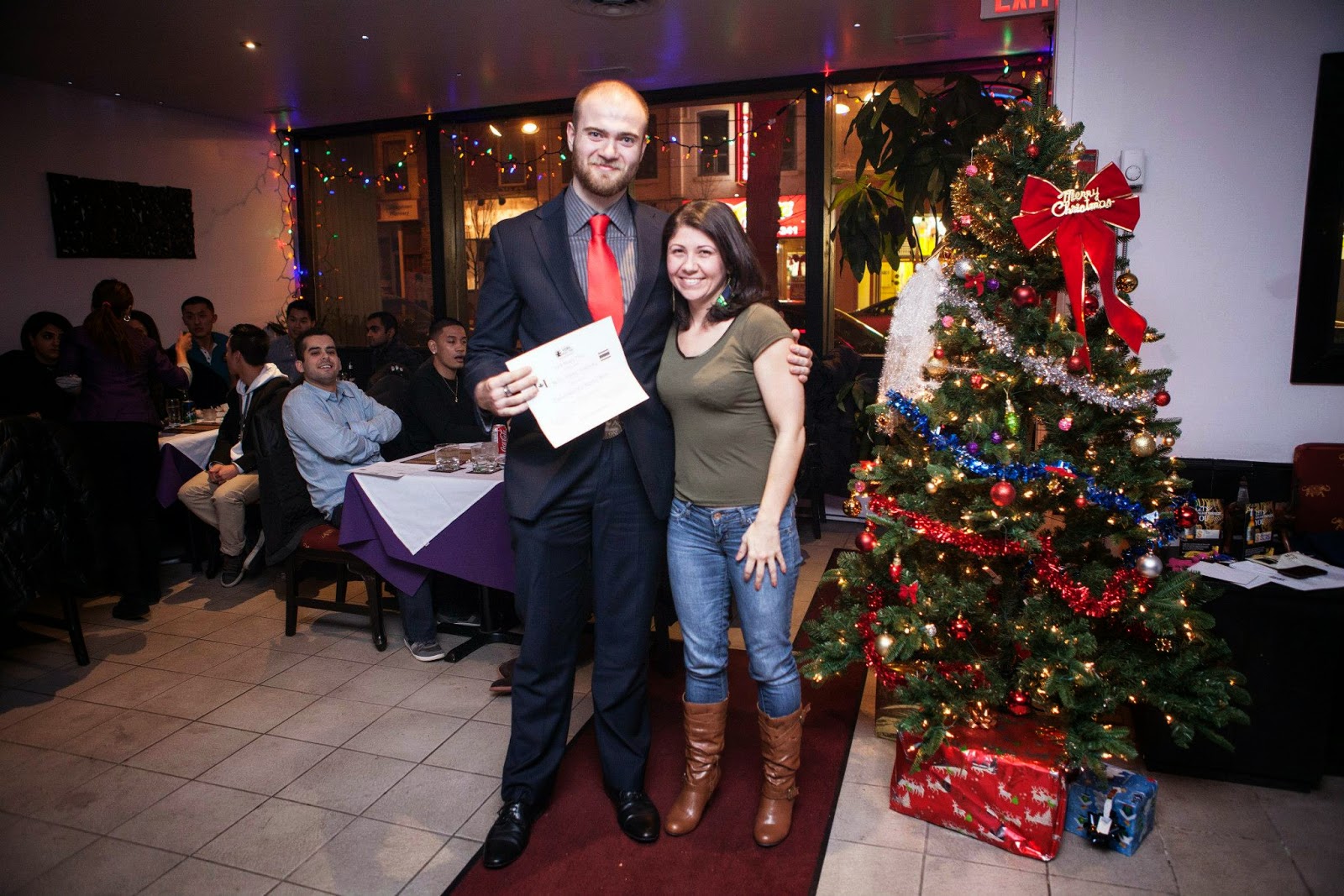 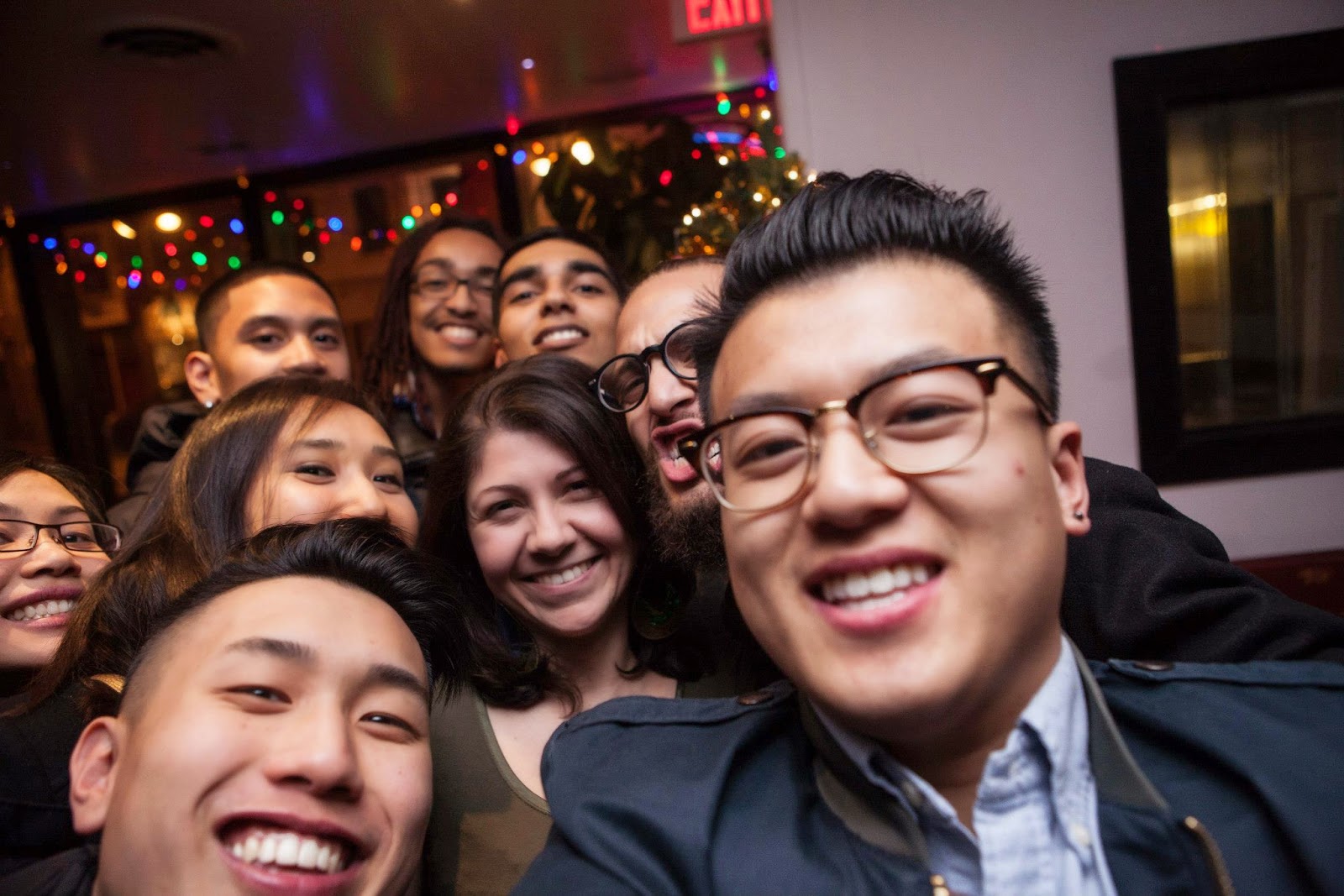 Dropped on the Internet by ThisOne at 11:08 AM No comments:

Get your NEW gloves and hoodies while they last! Also in are fresh Thai pads for our regular classes. Always upgrading our quality game at York! 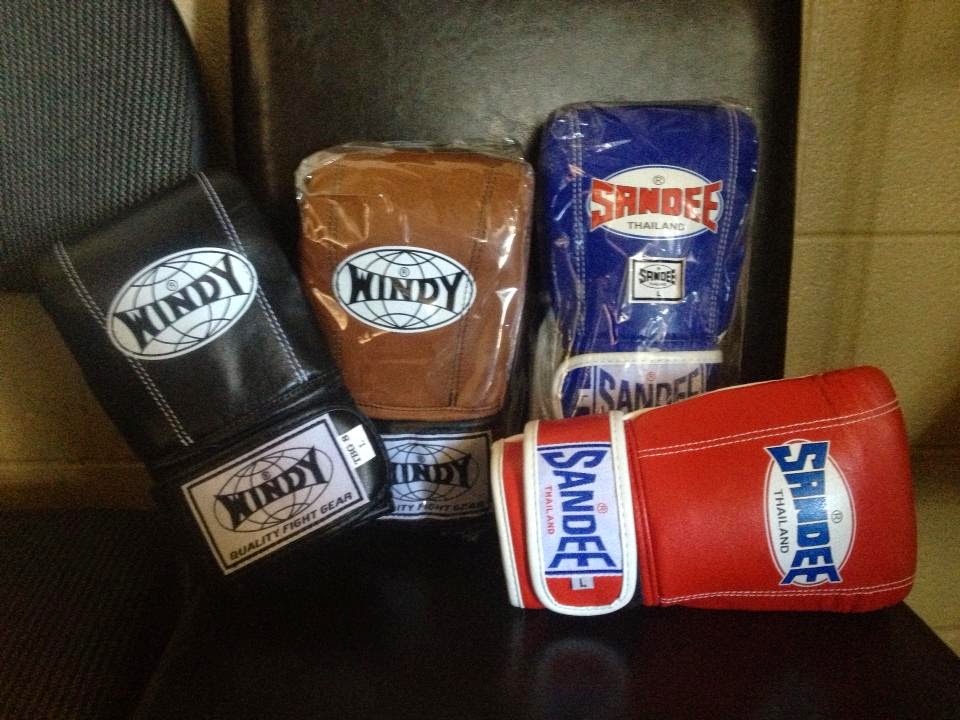 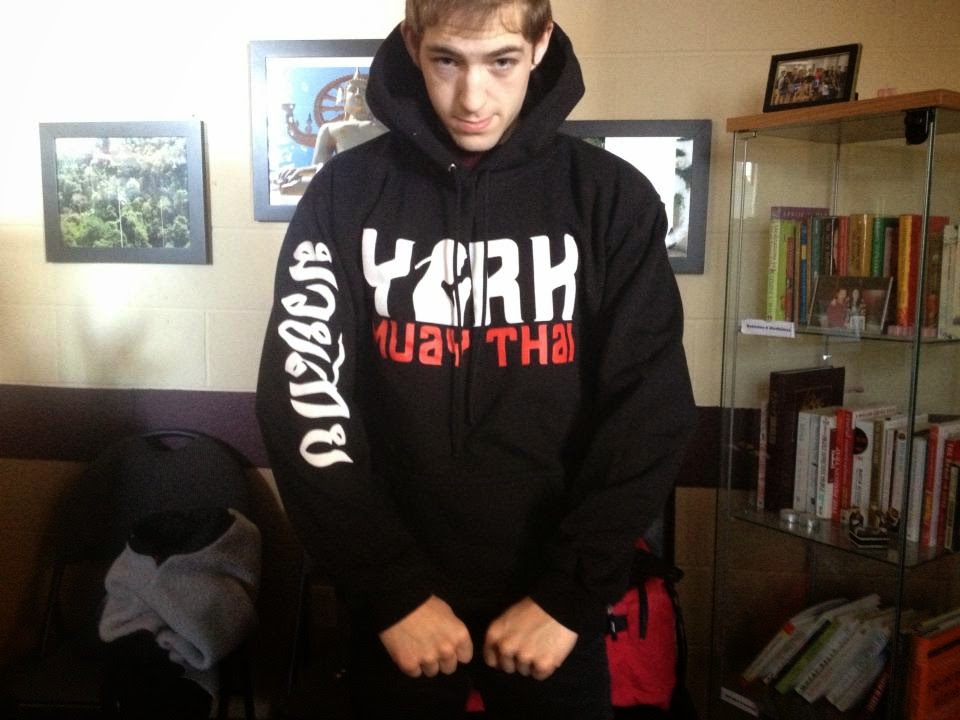 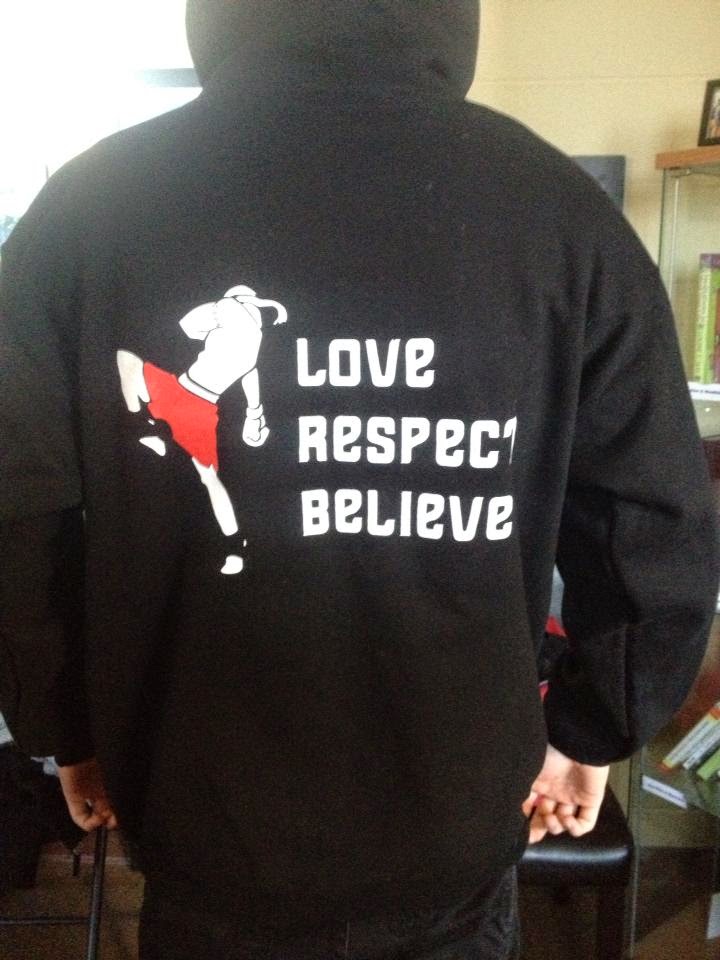 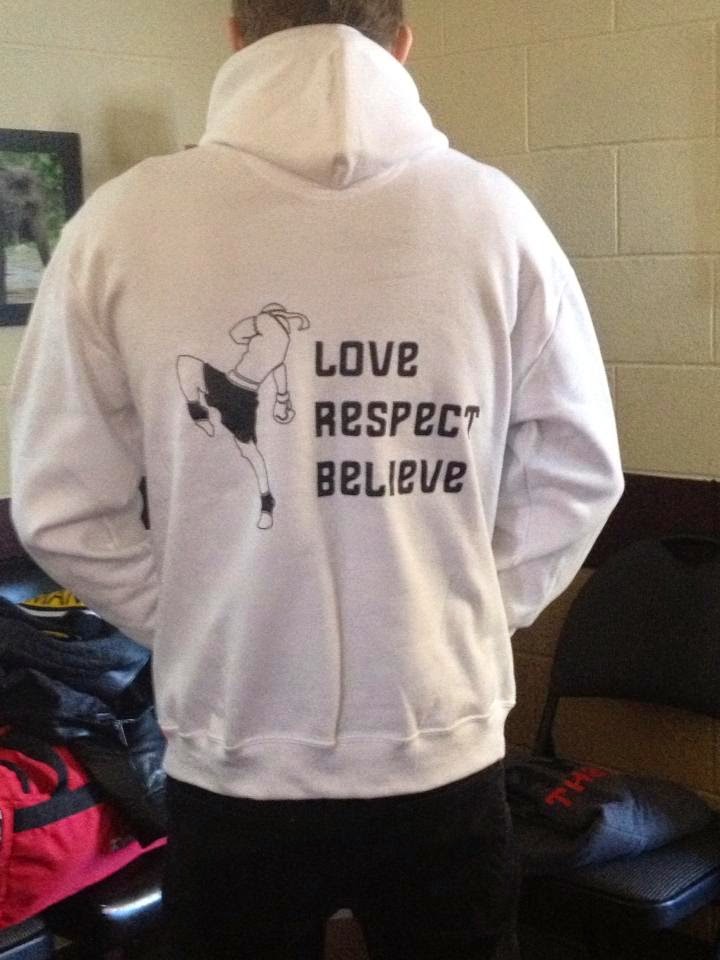 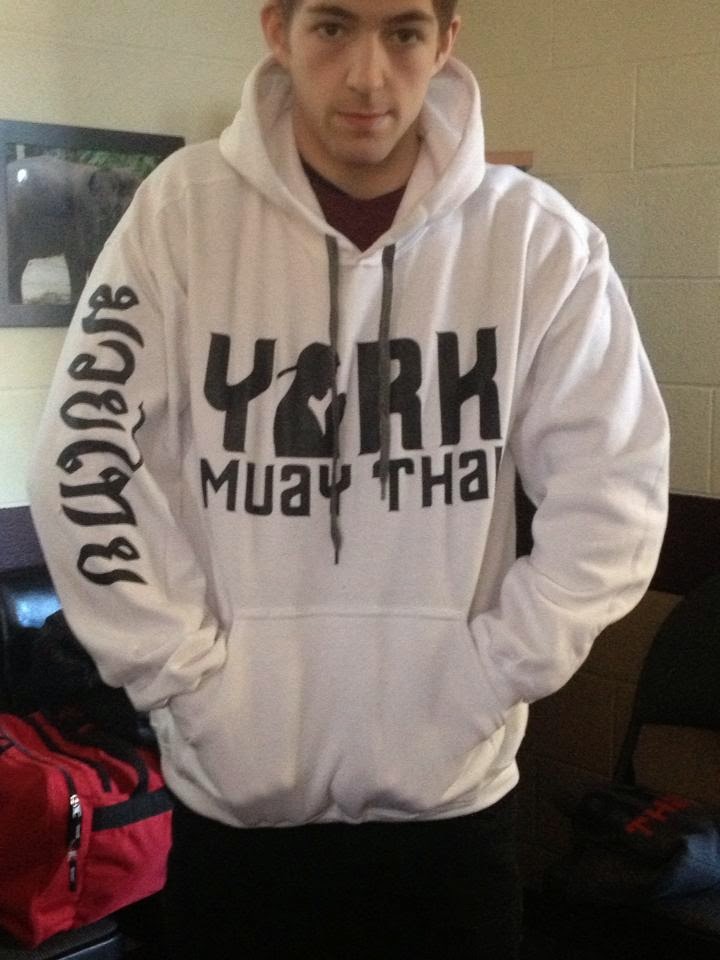 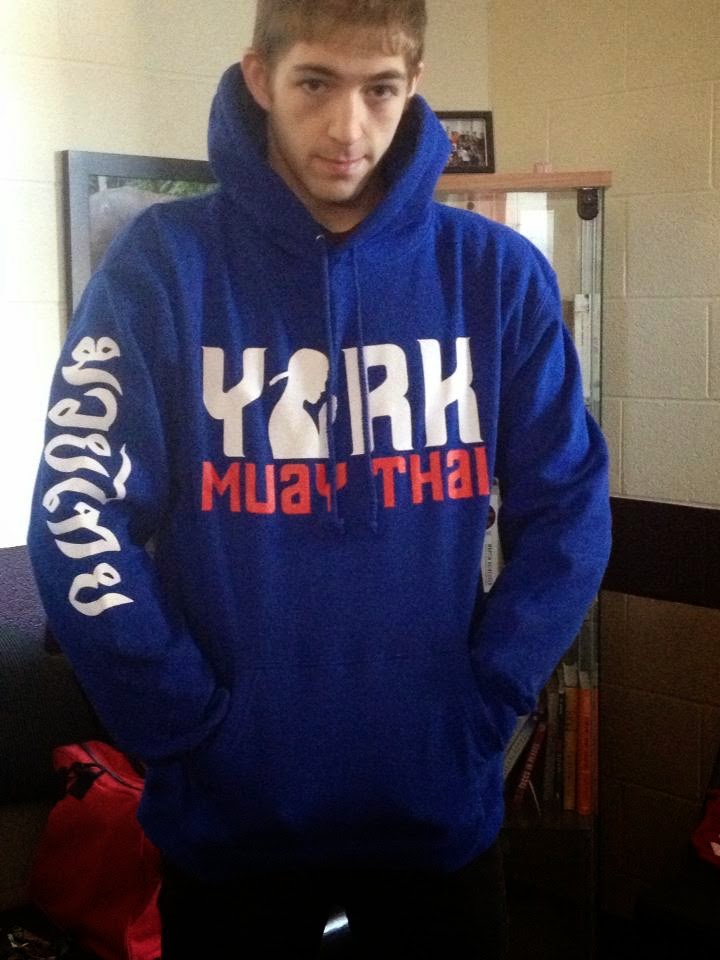 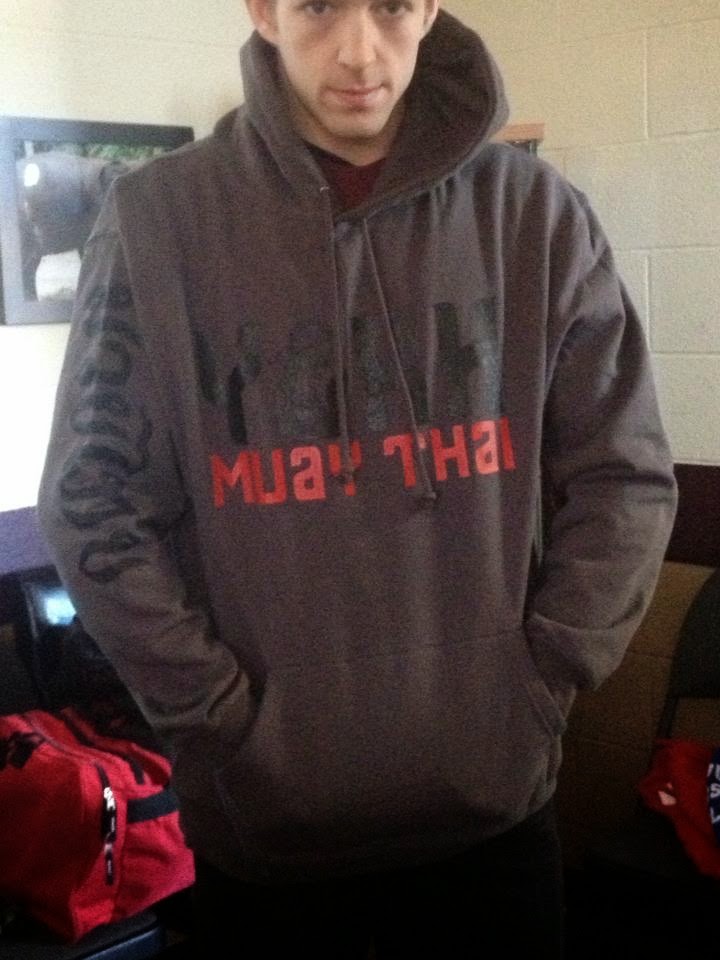 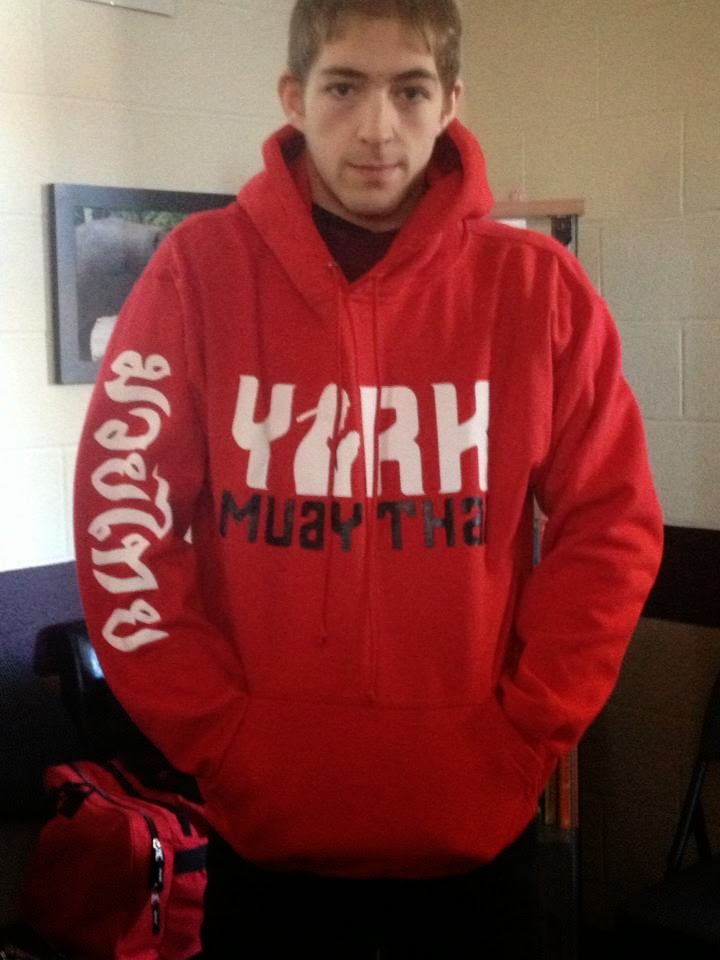 Dropped on the Internet by ThisOne at 5:02 PM No comments:

Thanks to our visitors from Victory Muay Thai and Warrior Muay Thai for making it out to spar last night. York Muay Thai loves you!

Dropped on the Internet by ThisOne at 4:59 PM No comments:

What a fun year we had! Thank you to all the kids and assistants for making 2014 such a blast. All the games and exercises have made our Tuesdays and Saturdays high energy and full of learning :) 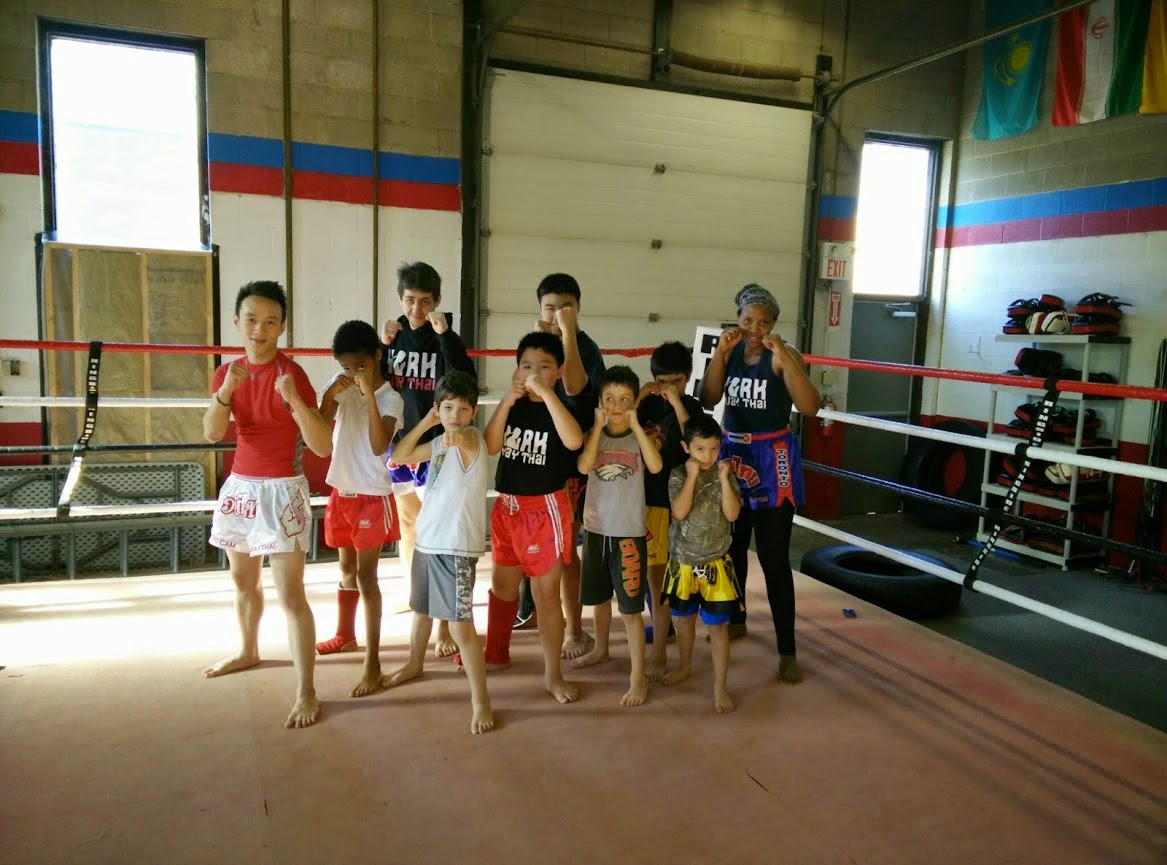 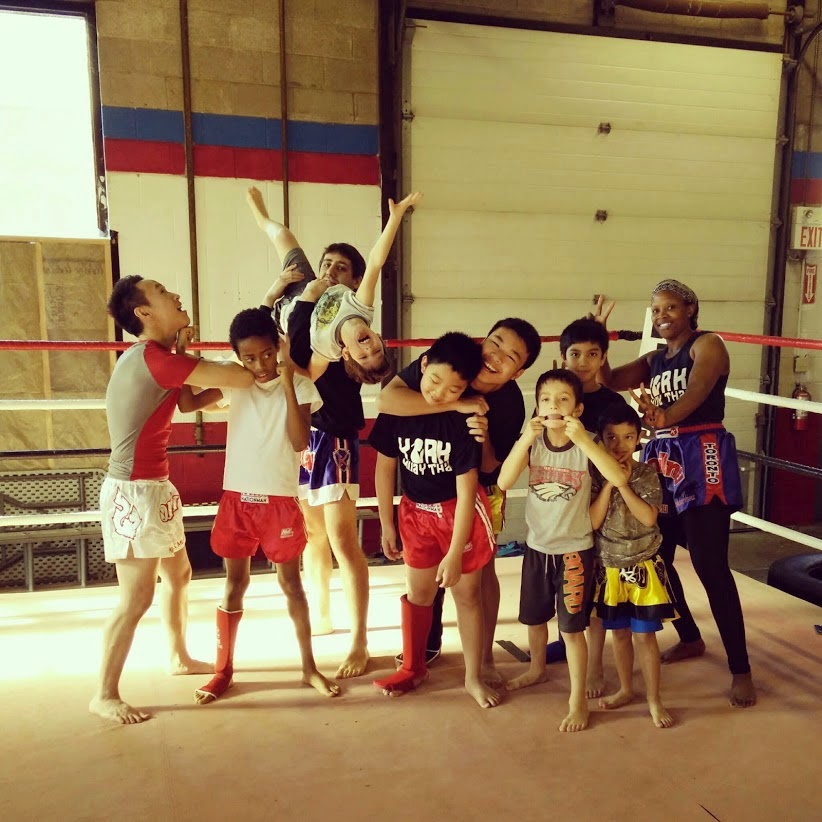 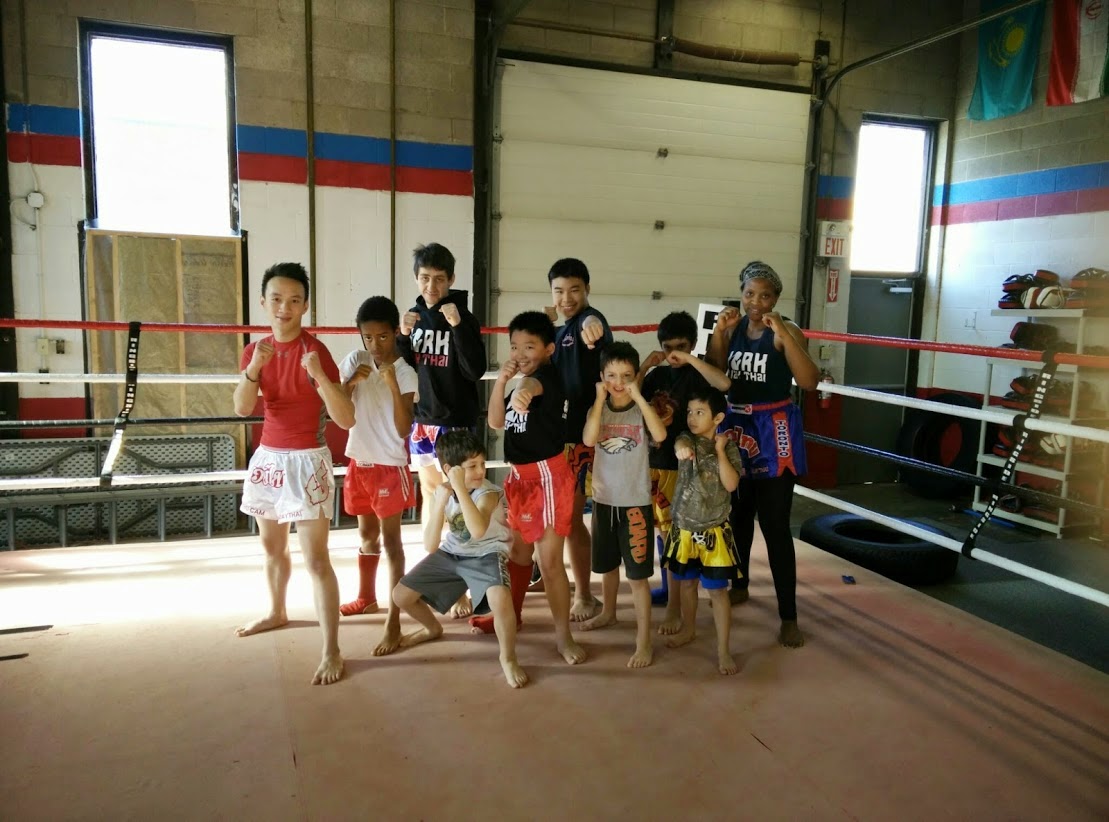 Kru Cam, Hadja and Kru Jen wish you all a great holiday and happy new year!

Dropped on the Internet by ThisOne at 4:54 PM No comments:


Dropped on the Internet by ThisOne at 12:24 PM No comments:

The holidays are always the hardest time of year for people who are in need.
This year especially, due to the economy, people who are less fortunate are having an especially difficult time making ends meet. Food banks are not experiencing the same level of donations that they usually receive this time of year. York Muay Thai would like to help this situation, so please consider bringing a non-perishable food donation to our Christmas party (please RSVP) which will be donated to a local food bank.

You may also drop the food off at the gym. PC Patrick is organizing.
We are strong and privileged. We are martial artists. We can help those in need.

Dropped on the Internet by ThisOne at 4:54 PM No comments:

Student of the Month (November 2014): Carmen

Dropped on the Internet by ThisOne at 4:48 PM No comments:

Kru Jen recognized as Kru Yai of the year

Our senior assistants recognized for their excellence

YMT at the Gala:

Dropped on the Internet by ThisOne at 12:31 PM No comments:

As we head into a week focus on defense, here is a Thai legend Poot Lorlek demonstrating the basic foundation behind our study...

Some background behind Poot:

Poot was a Thai boxer with very colorful tactics, and is a real pleasure to watch. Sharp eyes, remarkable agility and speed was his trademark.All these elements help explain why he was dubbed "The Angel Boxer." It was simply because he was rarely beaten. Out of some 80 matches, he was never knocked out, or even counted down: Poot was the star of his time remaining at its height for seven years from 1970-1977.His records said it all. Poot once successfully took the Junior Featherweight championship from Samyar Singsorntorn. But he eventually had to relinquish the championship, simply because no one dared to challenge him. Poot was one of those Thai boxers who often encountered opponents heavier than himself. His skills and speed, however, helped him to come out on top always.Poot eventually had to turn to international boxing because it became hard for him to find a challenger in Thai boxing.

Dropped on the Internet by ThisOne at 11:32 AM No comments:

Here are some excellent fights to illustrate some of the points we have been discussing in our last week of classes. When you watch these fights, you will see teeps utilized offensive maneuvers (and some defensive as well, although good offense and defense are essentially two sides of the same coin).

Think about the intention behind each teep being used... to intimidate, to cut off, to set up, to frustrate, to knock out. Each fight will have its own unique context for the teep. Study hard, and don't be afraid to ask questions during or after class to your instructors.

Dropped on the Internet by ThisOne at 11:26 AM No comments:

At YMT, our focus is always technique first, power then speed. Strategy/timing is another big focus but it is embedded in our curriculum: how we train our drills and understand our technique. This is one of the reasons why we have a monthly focus: a technique that takes the forefront of our classes each month and gives us a chance to really dive into the details.

We truly believe in strong basics being the path to victory. Function over flash: Simple techniques applied at the right time.  In honour of Teep month, here are some clips of our amateur athletes throwing very simple push kicks...but with effective timing.


When we think of timing, we need to ask ourselves what means...what the desired effect is. A teep is not simply a kick that pushes, nor is it a "front kick." Teeps can create space for another weapon (which means the amount of space created will differ depending on the intended follow up), disrupt an assault, cause intimidation, control the available space in the battlefield, misdirect the opponent's intended strategy...etc etc. In other words, there is always a context. Whenever you watch fights, or even this video of our boys, think about why the technique is being thrown and whether or not it is  effective in its use.

Dropped on the Internet by ThisOne at 10:35 AM No comments:

Dropped on the Internet by ThisOne at 12:23 PM No comments:

The Pre-Order is finally ready!
These are Gilden hoodies and will only come in Small, Medium, Large and XLg.
Pre order is $50.00 You save $5 plus you guarantee your size and colour.
Pre-order payment MUST be made by December 5th!
We will not be ordering many extras so please place your pre-order at the gym!

In addition to the design above, here are your choices:

Dropped on the Internet by ThisOne at 5:55 PM No comments:

In the spirit of Hook and Uppercuts for the month....This an old fight from 2003: the second K-1 MAX ever! The video isn't very long, so you know it's going to be an explosive ending!

Dropped on the Internet by ThisOne at 11:19 AM No comments:

Please support Muay Thai in our province and help get it officially recognized:

Please find the link to the Ontario Ministry on the website, send a letter or comment lending your support no later than Dec 8th. Even if you are not from Ontario...this will benefit MuayThai throughout Canada...let your voice be heard!


Dropped on the Internet by ThisOne at 10:37 AM No comments:

Dropped on the Internet by ThisOne at 4:15 PM No comments:

Here is a quick recap of the events:

We arrived safely Thursday Nov 6 and immediately began the weight cut for PC Jack, Zhang and Julius. We also had the pleasure of cutting weight with some new friends from Houston Muay Thai and Kru Pong's Muay Thai.

On Friday all of our fighters comfortably made weight and got to relax for the rest of the day watching Glory on tv and eating.

First fight on Saturday for us was Jack for the mens 135 B class. Jack got in there and fought a close war against an opponent from the US. Jack had just enough edge in the clinch and overall power to win unanimous decision. Also need to mention that there was one pretty sick elbow in there that made a sweat cloud...ohwaaaay!

Second up was Julius for the mens 125 c class. Julius got in there with the guy who would eventually win the entire tournament in a very devastating fashion. Julius used great technique and kept a tight guard, but the opponent was one of the strongest and fastest fighters there that weekend. We made a call, and decided to live to fight another day.  Julius has improved so much in the last little while. We are excited to see what he does next.

Sunday saw Mike and Jack up back to back. We had a flight to catch and needed to win and go home.

Mike stepped up against the 2014 TBA champ. After a 2 and a half year lay off, Mike came back into training and fighting this year, racking up 1 fight and a few demos. This was an incredible test for him and we were excited to see him rise up. Mike opened up with hard straight knees, and rallied with this punches. His opponent, however, used his speed and strength to get inside, work a strong clinch game and then moved enough to keep the fight in his favour. It was a banger of a fight, but Mike lost to a great opponent. He did show us that the title was not out of his reach, and we are confident he will be back with some impressive wins.

Jack was our final fghter, matched against a tough customer from the U.S. This, as PC Patrick would say, was a great Thai vs Dutch style match up. Almost right from the get go, Jack got in his opponent's face to open up with power punches and kicks. His opponent tried to play a strike and circle game but Jack put too much pressure for it to work. Clinched up, it was actually a very tight race. His opponent utilized good turns and had some strong knees of his own. However, Jack still applied more pressure in this range and continued to move his opponent backward.

In the end, Jack was announced as the winner unanimously, and the B class StriKing tournament Champion!

It was an incredible weekend, one which we will not soon forget. All of our fighters faced the top guys at the tournament. This was a very valuable experience for all of them.

A sincere thank you to the coaching and support team: Kru Jen, PC Construction, PC Patrick, PC David, PC Cam and Imtiaz. Also a thank you to all who supported us in our fundraisers and training!

Love, respect and believe from the YMTeam!

Dropped on the Internet by ThisOne at 11:12 AM No comments:

Dropped on the Internet by ThisOne at 12:06 AM No comments: 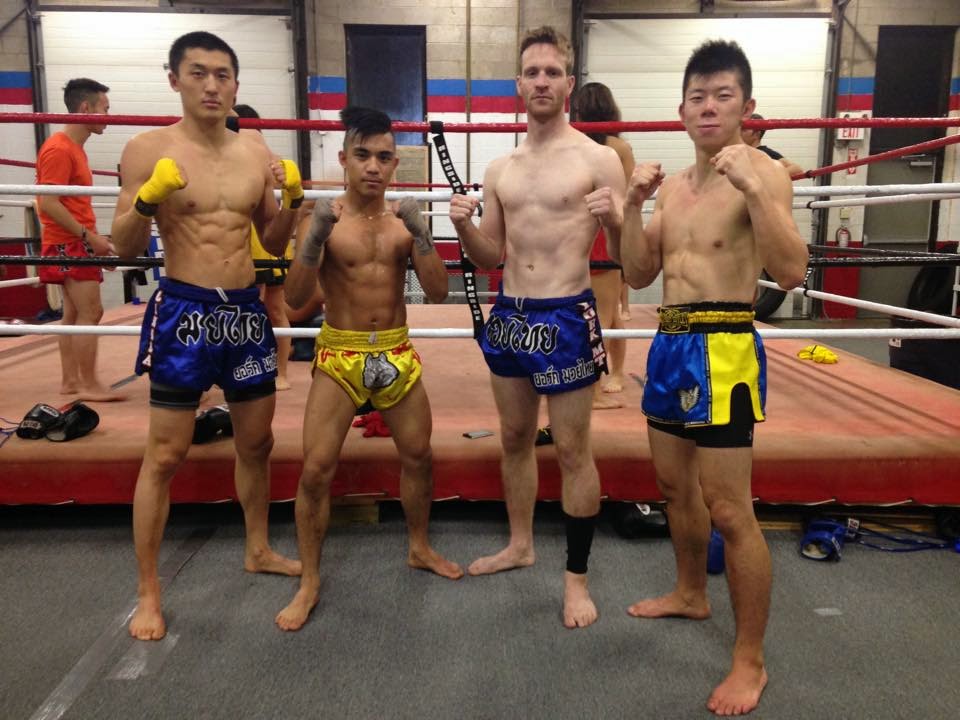 Dropped on the Internet by ThisOne at 9:52 AM No comments:

This Thursday afternoon, Kru Jen and PC Cam will be flying out with Pc Patrick, PC Jack, Zhang and Julius to Oklahoma to participate in the StriKing Fight Nights Muay Thai tournament.  They will be back on Sunday, hopefully with the gold!!

Classes will run as usual during this weekend. Thank you to all who helped fundraise to send our fighters over the boarder to rep our YMT family! It was certainly a TEAM effort, and we have had amazing support preparing for this event.

Dropped on the Internet by ThisOne at 9:10 AM No comments:

Fall back with this throwback to the Golden Era of Muay Thai... when the competition was at its fiercest!  This old fight between a 19 year old Sakmongkol (who would become a legend in our sport) and Ramon Dekkers (another fighter whose battles earned him legend status) is a great way to round out elbow month.

Not for the squeamish though!

Dropped on the Internet by ThisOne at 9:04 AM No comments: