http://www.youtube.com/watch?v=Z-agjnKXQ_w
^ throw was legal. Pause the video if you don't believe. He planted on the outside (no hook), and turned him over (Joe landing sideways only confirms it). Very common move in Muay Thai. That throw is common and allowed in WMC and WBC bouts, as well as many other amateur leagues like the TBA.

There's a lot of people on the Muay Thai Authority facebook claiming Simon did some illegal Judo witchcrafthex technique. Hope that cleared it up.

I didn't realize how heated I'm getting over Simon's fight. I'm sure he doesn't even care, since he knows what went down and won in the end.

I mean no disrespect to Joe. This is just to prove a point about the legality of Simon's technique. At the end of the day, fighters on the professional stage are what they are. We don't fight them or for them. Never forget that they have one of the hardest and least paying jobs in the world. Respect.
Dropped on the Internet by ThisOne at 2:23 PM 2 comments:

Take a look Canadians. This guy right here calls Toronto his home. Last night, he just became the WBC champion, and now has two of the most reputable titles in Muay Thai, winning them from two very worthy opponents. His fight last night was not even the Co Main event. I'll bet a large percentage of the country doesn't even know his name, or what he does.

If you don't know what Muay Thai is, or don't follow it, start! Google, youtube, ask questions. Canada has a hotbed of amateur talent and some budding professionals. Without your support, more people won't know about fighters like Matt Embree or Simon Marcus, who represent OUR country.

But enough banter...I'll give you the recap if you missed the fights here:

Simon fights Joe Schilling in a non title fight for the main event. Joe comes out relatively active and connects with a couple punches, while trying to transitioning to elbows. Bad Bwoy starts off in a slower Thai style, relaxed and stalking...only measuring with a couple switch kicks. When Joe really presses, they end up clinching with Joe pushing Simon's head back pretty far.

About half way through round one, with both fighters tying up (Joe with under hooks), Simon lets go a couple visious side skip knees, then turns Joe over his leg and dumps him.

**Here's where the controversy enters: Simon's dump is a common one, where the throwing fighter lands on top of the other. When Joe got up, he was a bit wobbly. Many eneducated fans are calling foul play on the throw, as they claim it was illegal and that Joe was damaged from hitting his head on the canvas. Let me tell you something, it's legit. I've used that toss and have had it done to me multiple times in amateur bouts and sparring. It's NOT rocket science, or an illegal voodoo trick.

More over, if you are as skilled as your opponent in the clinch (and with Joe claiming to be the better fighter, he should have matched up with Simon in that area), there are ways to avoid and EVEN reverse that throw. All I'm going to say is this: if people are doubting the legitimacy of Simon's throw, they are ignoring the gap Joe's performance as well. If Joe hit his head or got hurt when Simon fell on him, then the angry fans should start crying for everyone that WMC Middleweight champ Tum Madsua has ever fought.**


ANYWAYS, Joe gets up, and Simon walks straight up to him and gives him a left hook to the face, instantly resulting in a knockdown. The referee counts to 8, and sets them up to fight again. Simon walks right up to Joe again, this time sending his rear teep to Joe's face, then transitioning to a straight elbow that once again sends Joe straight down.

The referee counts, and Joe makes it up. His legs are not all there, and I can't blame him after 2 straight knockdowns of that caliber. The ref waves it off, much to the crowd and Joe's dismay (dude actually shoved the ref).

I wrote all this because the following link may not be up much longer: http://www.youtube.com/watch?v=G-oW9kNrJlA&feature=youtu.be


Unfortunately, there isn't any footage of Matt's fight yet. The only really odd thing to happen was Matt's cup coming loose shortly after round 1 started...and a giant pause in the action for him to fix it.

Otherwise, it was a competitive 5 round fight with both fighters connecting with Solid Muay Thai weapons. This was almost literally "chess with knives". Coke had a few well timed explosive punches, and Matt with some solid sweep and inside leg counters. However, Matt consistently landed the definitive shots of each exchange...his primary success coming from his straight right and some dirty hard low kicks. Matt got off with some good knees from the close clinch too. Coke was tough though, as he smiled with every strike.

In the end, Matt won the WBC 135 lbs title, by fighting probably the most clean Muay Thai of the night.

And that ladies and gentlemen, is what happened for those of you that couldn't watch it live. Congratulations to both fighters on the big wins!
Dropped on the Internet by ThisOne at 11:44 AM No comments:

Dropped on the Internet by ThisOne at 11:40 PM No comments:

Don't forget about the 30 hour famine this weekend, starting Friday at 5. Then we will watch the fights- Simon and Matt in Vegas!

To donate to the cause:https://myfamine.worldvision.ca/Famine/Forms/PublicProfile.aspx?id=15581

Please note that we are CLOSED for Monday February 20th for Family Day.

Enjoy your day off with your loved ones.

Kru
Dropped on the Internet by ThisOne at 4:26 PM No comments:

Simon Marcus on Muay Thai Authority: The Fighting Prophet and fight with Kaoklai

Muay Thai Authority did an article on Simon Marcus, which details his entrance into Muay Thai and his ambitions in the sport. It's a pretty good read, and also a true story about how passion and drive can be used to change you for the better.

This is an example of someone who found purpose in a self directed dream. Chok Dee Bad bwoy

Also notable is Muay Thai Authority's report on Simon potentially fighting Kaoklai on Muay Thai day: http://www.muaythaiauthority.com/2012/02/kevin-ross-vs-coke-eminent-air-and.html
This will no doubt be a great fight, which will pit Simon against one of the older but most accomplished fighters at his weight.
Dropped on the Internet by ThisOne at 4:17 PM No comments:

What DO you do?

Exactly what is Moo Tie?

^click to enlarge
Dropped on the Internet by ThisOne at 9:41 PM No comments: 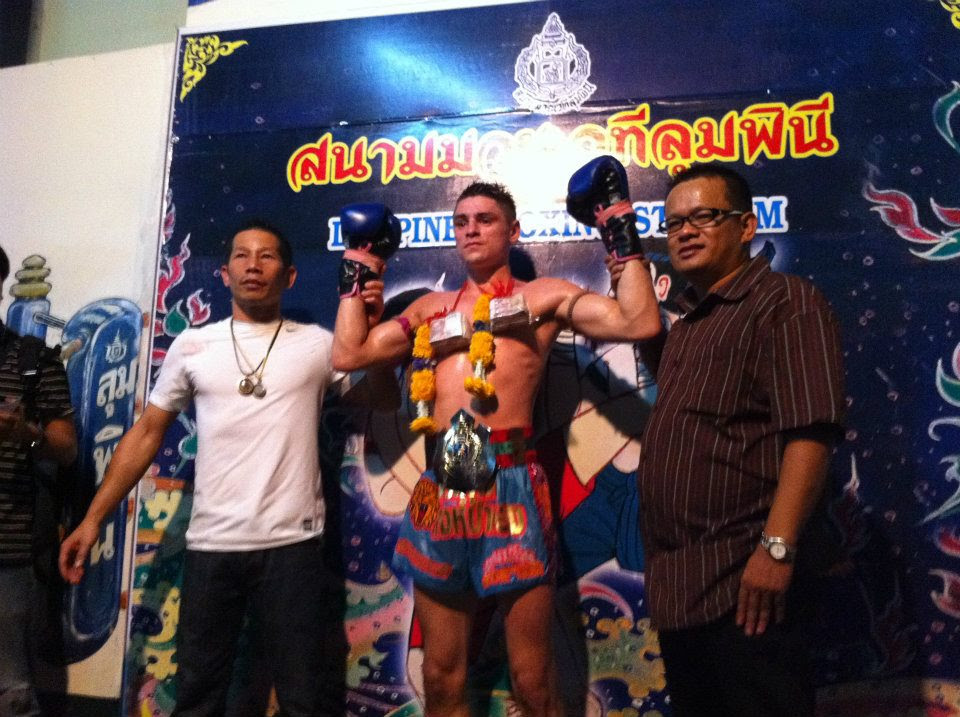 Kru Jen posted this fight on the facebook group. It features Damien Alamos, a young french fighter who has several WMPF world titles, but most importantly captured the Lumpinee stadium title at 140 lbs (probably the most important title in the world along with the Rajadamnern title).

This is one of his fights prior to becoming Lumpinee champ.

There are a few other top French fighters fighting the Thai circuits, like Antoine Siangboxing, and his lesser known (outside of Thailand) but veeeeery skilled brother Leo. Mehdi Zatout is another skilled French fighter who had competed in Thailand many times as a youngster, and now has a successful pro career.

Still, Damien might be one of the only to have actually won the coveted Lumpinee belt. Maybe in the future we'll see a Canadian prospect make it there...I have a couple in mind
Dropped on the Internet by ThisOne at 10:52 AM No comments:

http://www.blogger.com/img/blank.gifhttp://www.youtube.com/watch?v=WRKRdQKqKa0&context=C39feb99ADOEgsToPDskJ-r2zHZ5o1kBgEvlZBkpTb
Dropped on the Internet by ThisOne at 10:47 AM No comments:

Slamm to return this May

A news flash from Muaythaiislife.com: Slamm is back! For those who aren't in the know, Slamm is a Dutch promotion of full Muay Thai rules fights that are known to pit high level Thai fighters against high level European fighters.

Outside of Thailand, Eurpoean countries like France and the Netherlands have the largest pools of pro Muay Thai contenders fighting at a high level. Slamm has put on some crazy shows in the past, with headliners like Yodsanklai vs Andy Souwer and Kaoklai vs Tyrone Spong.

Get excited. These will be good fights.
Dropped on the Internet by ThisOne at 10:40 AM No comments:

On March 3rd, Ajahn Suchart will be holding a celebration at Siam no. 1 for the 20 years he has been teaching Muay Thai in Canada!

National Muay Thai day is usually March 17, but Ajahn is also adding the celebration to the mix!
T

There will be traditional Monk blessing in the morning at 10, no fee to come watch. Then after 5, there will be food, demos and entertainment of all kinds!

Kru Jen and the team will be in Buffalo that night with the fighters who are competing, so if you aren't going down there to support, head to Siam and celebrate with MT community. You can click the poster above to enlarge for more details.
Dropped on the Internet by ThisOne at 9:57 AM No comments: 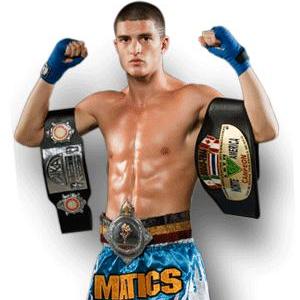 Matt Embree talks to MuayThai Authority about his upcoming bout with Coke Chunhawat for the vacant WBC Muay Thai title.

Read: http://www.muaythaiauthority.com/2012/02/matt-embree-talks-about-his-upcoming.html
Dropped on the Internet by ThisOne at 11:49 PM No comments: This isn't a video that breaks any new ground if you know a little about the Muay Thai scene in Thailand, but it's always cool to see some of the talent in these young kids. It's also well shot- props to Damon Logan.

The one that caught my eye in particular is the little girl at 4:06, Chery. I saw a video on youtube a while back of her kicking a bag with monstrous force.

It wasn't until watching this clip that I got to see more footage of her training and even in the ring. Also big respect to her busting out the one arm push ups!

It's a short watch, so enjoy!

More from the official website: http://www.thelittlethaifighters.com/
Dropped on the Internet by ThisOne at 9:46 PM No comments:

As of posting, this fight only has part 1 posted. Part 2 should be up shortly. I actually saw this fight posted back when it happened around 2008, but I couldn't find the old link.

Collosa, for those of you who don't know, is a gangster. This guy has fought Yod twice, and was able to win one of those fights. 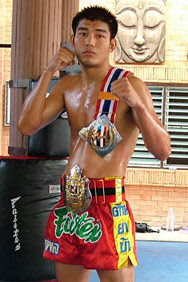 Naruepol is a former lumpinee champion who gained the most recognition on the Contender Asia.

Watch: http://youtu.be/vzhB7J9ozCU
Dropped on the Internet by ThisOne at 6:33 PM No comments:

Pre Order these Tshirts for 20$ and save 5 off the total price when they ship! The following is a preview of the new design that will be hitting our gym shortly :) Get excited! Pre Orders MUST be paid in advance at York Muay Thai, thank you. Deadline for pre-orders is Friday February 10 at 12:00 NOON. 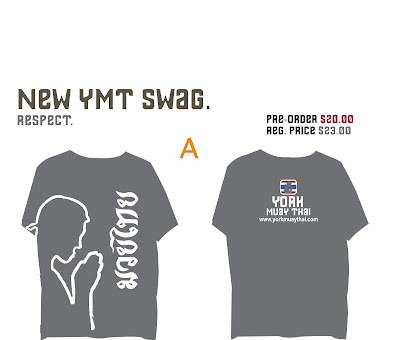 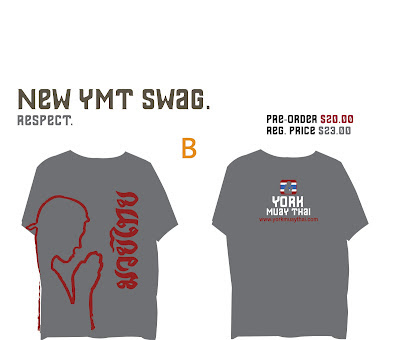 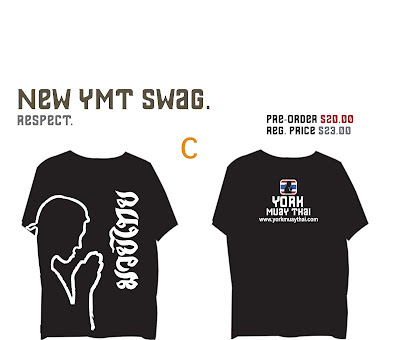 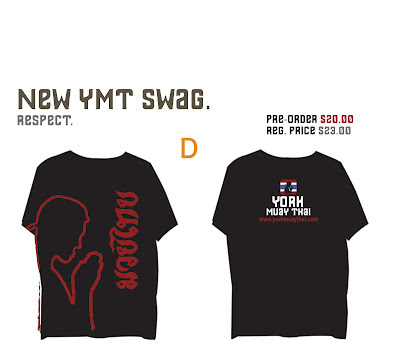 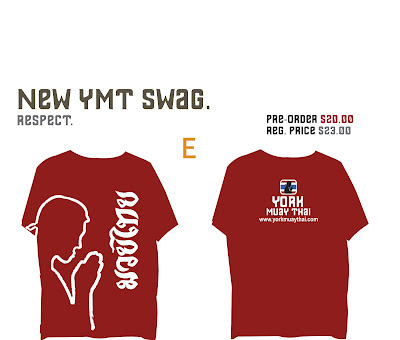 Dropped on the Internet by ThisOne at 11:01 PM No comments:

Here are all the bouts in the infamous rivalry between Ramon Dekkers and Coban Lookchaomaesitong.

For those not in the know, these two fighters were both two of the most explosive athletes of their time, and just about never backed down in a fight. Put the two together in the ring and you get fireworks. Put them in the ring 4 times and you get this collection of quality entertainment.

Watch: http://www.muay.ru/2011-07-17-ramon-dekkers-vs-coban-lookchaomaesaitong/
Dropped on the Internet by ThisOne at 11:29 PM No comments:

There are always a million reasons not to do something

"You can have an injury, get a new b/f or g/f, work overtime or just be lazy but every one of these is just an excuse. Take away injury, take away g/f, b/f, work and what are you left with? YOURSELF. Take care of YOURSELF first before you start to make time for these excuses."
Dropped on the Internet by ThisOne at 11:21 PM No comments: