York Muay Thai is having their Annual Holiday Party! Each year we get together and feast on authentic Thai food and follow the traditoins that Ajahn built for Siam No.1.

As always we will have:
-Awesome Thai Food
-Raffle prizes and giveaways
-Speeches from your Kru's
-Speech from Ajahn
-2015 in review video
-Canned Food drive donations for less fortunate *please bring!*-Students/Instructor awards for 2015
-Honoured Guests
-Plans for 2016 - What's New!

Don't miss this event! From beginner to senior student you are all family and you are guaranteed a good time.

Friends, kids, spouses are more than welcome but please write that on the wall.

This is an old fight from the 2010 Beijing Sport Accord games, but it's the finisher that gets everyone talking.  Seeing as teep month is starting this week (and you know how much we love teep month), enjoy one of the flashiest we've seen in this battle between 2 tough light heavy weights!

Dropped on the Internet by ThisOne at 12:00 PM No comments:


Dropped on the Internet by ThisOne at 5:48 PM No comments:

Happy Birthday Kru Jen!! From all of York Muay Thai!
The messages in the image are all things your students and friends at the gym have wanted to thank you for. Many of us felt very similarly about the gifts you have given us, and so many of the messages submitted didn't make it in. Instead we chose the ones that best represented the spirit of our gratitude. We wish you the happiest of birthdays!!

Dropped on the Internet by ThisOne at 5:46 PM No comments:

A Thank You to Ajahn Suchart!

York Muay Thai thanks Ajahn Suchart for coming out and guest teaching last night's 7:30 class. Couldn't fit them all in one picture, but we were looking at about 40 students grinding it out!


Dropped on the Internet by ThisOne at 5:45 PM No comments:

Some shots of Julius at the Provincials

Dropped on the Internet by ThisOne at 5:43 PM No comments: 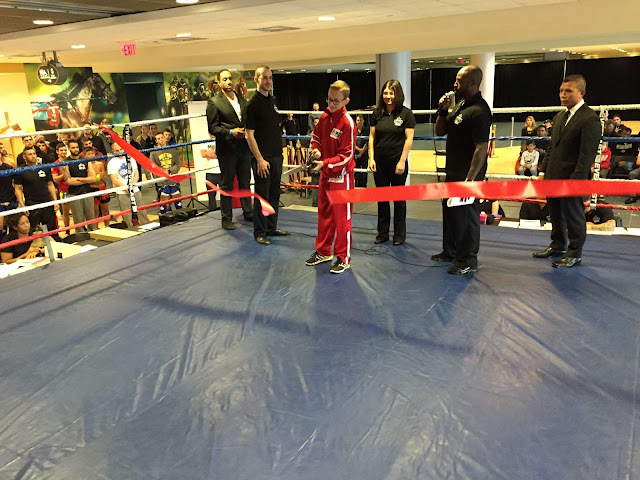 Above is a photo from the opening ceremonies of the inaugural Muay Thai Ontario Provincial Tournament. It's youngest competitor, Cosmin of Mas Thai Boxing, cut the ribbon to kick off the day of fights. It was only fitting that the youth who will inherit the sport officially began the event. 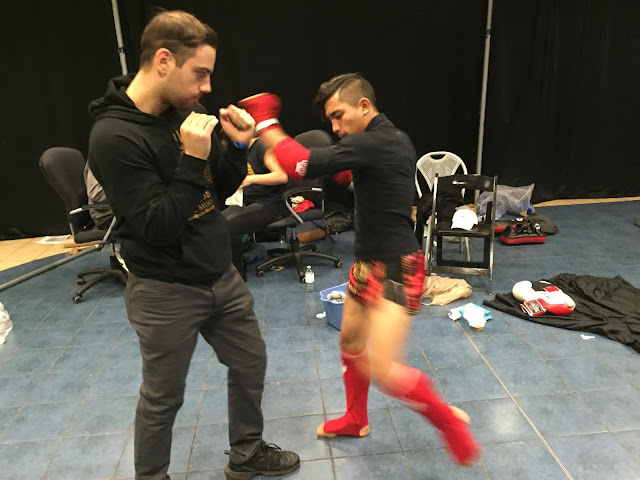 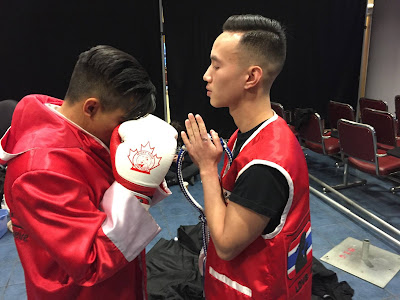 No Excuses, No easy fights
As a last minute change, Julius moved up a weight division to fight a strong and experienced competitor from our friends at Kombat Arts. After a rough start early in the first round, Julius came back in the tail end to make the fight a war. After 3 rounds of non stop action that utilized all 8 weapons from both competitors, Julius lossed a decision.

Reflecting on the Experience

The fight was an excellent and entertaining one, which we can all learn from. A determined fighter can always come back strong no matter the circumstance. There will always be aspects of your game that you think you've trained to be instinctual, but still need work. Most of all: always take responsibility and step up to challenge....you always have a choice, and it is our hope that you choose to be strong. 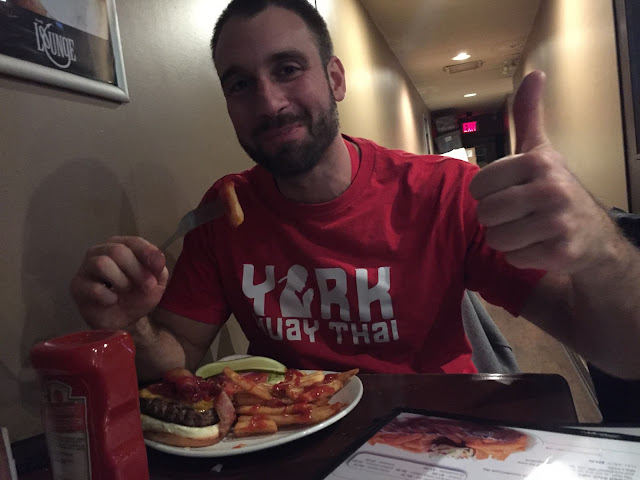 Last but certainly not least, Jeremy won his fight and the C class provincial tournament division at 199lbs! Jeremy worked the legs and body of his opponent with kicks early, and then stopped his opponent with strong volley of punches. For those of you who don't know, Jeremy lives in Montreal and trains with Kru Ash and his fight team. YMT is happy for you buddy!

Dropped on the Internet by ThisOne at 11:16 AM No comments:

For those few of you who don't know who he is, John Wayne Parr is an Australian Muay Thai fighter who has been around the block. He's a 9 time professional world champion and has pretty serious list of murderers on his fight resume. He's fought Thai legends like Orono Por.Muang Ubon, Yodsanklai Fairtex, and Buakaw Por Pramuk, as well as tough foreigners like Jean-Charles Skarbowsky, Mike Zambidis, Marco Pique, and Cosmo Alexandre. He's been fighting for over 20 years and has amassed over 120 fights in this amount of time. His style was not always the prettiest to look at, and his results were mixed, but regardless he always shows up to fight.

"I don't think it matters if you win or lose. They're more worried about if you're going to stand there toe-to-toe, and get cut, and get hurt, but keep coming forward and keep trying your hardest. That's worth more than winning."

"So many foreigners....would get the tiniest nick and they would pretty much quit on their stools....Whereas I'd watch the Thais and they would have half their head missing and couldn't get out there fast enough to try and redeem themselves." 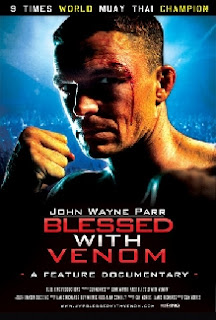 Blessed with Venom is a documentary about Parr's career that was released in 2011 and circulated around various film festivals. It gained more popularity earlier this year when Parr got the rights to the film and put it up on his YouTube channel in it's entirety (That's right, this is a free one). It follows the early stages of his career coming up as a professional fighter in Thailand in the 90s. It's an inside look into the training and fights from Parr's perspective directly. He talks the viewer through several fights, including his battles with Yodsanklai Fairtex. He visits the camps that he trained at in Thailand, reunites with his old trainers, and elaborates on the hard conditions that he lived through in order to become a world class Muay Thai fighter. He also gives a tour of the old Lumpinee stadium while reminiscing about his times fighting there. You will definitely feel soft watching this movie.


Prior to watching this documentary I was not the biggest fan of JWP as a fighter. I knew he was a tough guy, but I didn't see his style as something that I would want to emulate in my own training. But after watching Blessed with Venom, I have significantly more respect tor him. His will is unbreakable, and he will fight hard through anything in order to blast his opponent. He's also an exceedingly likeable, down-to-earth guy, so I didn't mind spending an hour-and-a-half listening to him narrate the story of his career and give an inside-source explanation into fighting on the world stage while undergoing his own personal trials and tribulations.

Halloween Contests: Vote for your fav costume and pumpkin!

Saturday we had our Halloween Party which was lots of fun but also had 2 contests that we need YOUR help for!   If you are on FACEBOOK, you can vote now :)

Some of last night's atmosphere...  Kudos to Kru Jen on the decorations and Derrick on scaring people poopless with his get up!

Dropped on the Internet by ThisOne at 3:30 PM 1 comment: