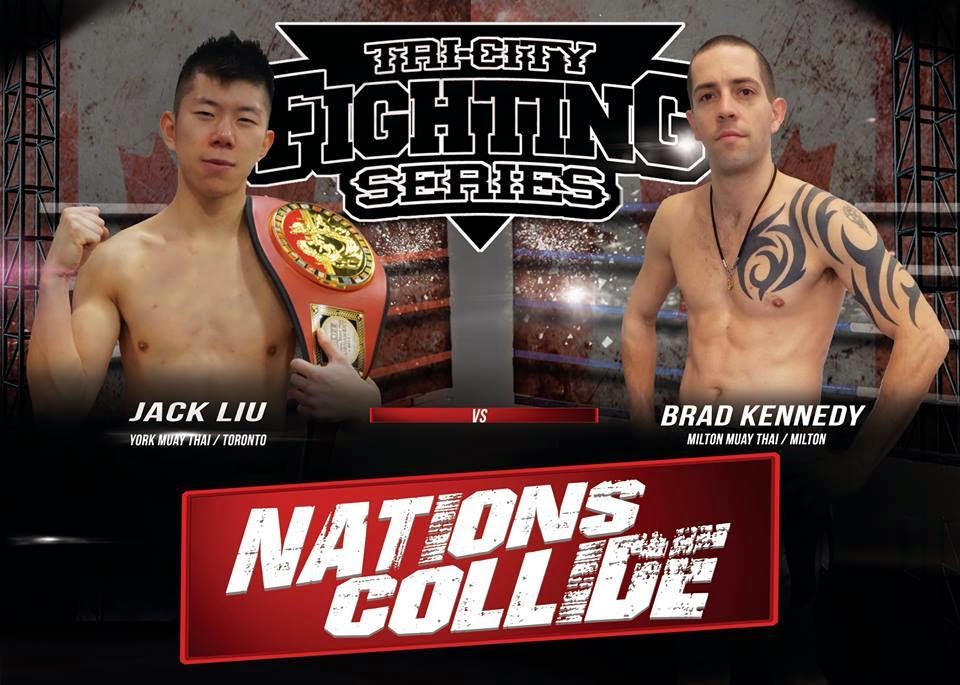 PC Jack will be repping York Muay Thai once again on March 13!  At Tri City Fighting Series 2: Nations Collide, he will be battling Milton Muay Thai's Brad Kennedy in a full rules fight. Brad is a friend of YMT and a strong fighter who's style should make for an exciting match up with Jack. Both guys are scrappers and coming off big wins, so expect some great exchanges!

Dropped on the Internet by ThisOne at 10:35 AM No comments:

They always come back part 2!

YMT alumni and champion Mike Durst in the house! Our beloved friend came by for a fighters class to say hi and sweat once more with the old team :)

Dropped on the Internet by ThisOne at 11:46 PM No comments:

What's in a Fighter's Name

A great story from the heart of Thailand, and some insight into the meaning behind Thai fighter names... a tradition which differs the typical Western fighter nick name. Definitely worth a read! 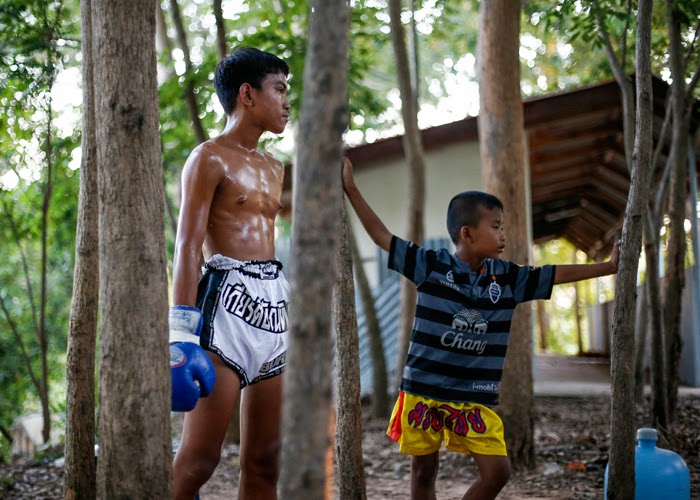 Dropped on the Internet by ThisOne at 11:44 PM No comments:

Truly strong people are willing to bend down and help raise others up. Proud of our kids.
#muaythai #yorkmuaythai #ymteam #ymt#loverespectbelieve

Dropped on the Internet by ThisOne at 11:41 PM No comments:

Learn to run clinics with Papa Tee, every Monday and Wednesday at York Muay Thai! 6:45pm.

Want to run with efficiency and without knee pain? Come on out!

"I used to suffer from shin splints when I started running, but with Terry's help I was able to adjust my form, and the pain went away eventually. 5/5 would recommend!"

Dropped on the Internet by ThisOne at 7:18 PM No comments:

They always come back!

A reunion of the #ymteam2011! All of these guys trained hard together to get ready for the TBA 2011 tournament. Some of the best times were had and best bonds were formed during all of the tough training and travelling. Soooo good to have them all train together again last week!
#yorkmuaythai #muaythai #loverespectbelieve#fightersatheart

Dropped on the Internet by ThisOne at 7:14 PM No comments: 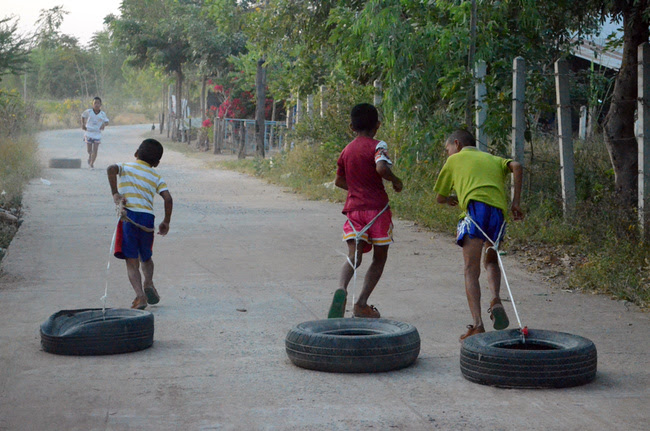 The article, AN AMERICAN SOCIOLOGIST IS STUDYING THE BEHAVIOR OF MUAY THAI, is an interesting one. Mari DeWees, professor of sociology, examines the multiple aspects of the art we all know and love, and gives interesting insight into how the future might play out.

Learn about the current conditions in of Muay Thai in Thailand, the dynamics between teacher and student, how foreigners are treated vs Thais and much more.

Dropped on the Internet by ThisOne at 4:43 PM No comments:

Tip of the Day

Whether in shadow boxing or on the pads, bag, or in sparring...there are always opportunities to refine and improve. Each one can help in a different way with certain aspects of your game.


Tip for the day:
Once you've gotten the basic idea of a technique down, try doing continuous repetitions of it on the bag or pads without stopping to correct yourself of any mistakes.

This does not mean mindlessly striking the target over and over. Instead, try to feel the mistakes AS you pump out reps. Try fix your technique AS you practice...adjust range, adjust positioning of hands and shoulders, etc etc.

In a fight, this is what will happen anyway. You'll have to trust the technique you have trained already, but need to be able to adjust it on the fly.

Improving your self awareness in the moment is one of the many benefits Muay Thai training can bring to your life. Take advantage of it!


Dropped on the Internet by ThisOne at 10:59 AM No comments:


It's important to build confidence and power, but also control and compassion. Behind every strong fighter should be a caring human being. 2 sides of the same coin.


Us showing our 2 sides:

Dropped on the Internet by ThisOne at 6:24 PM No comments:

Coach Grant's thoughts on why YMT is such a special place!

In this my first blog post I want to explain my role at YMT and why I do what I do. Most readers are familiar with my role as expert in physical conditioning. At YMT I’ve been able to develop as a movement coach while learning a new movement skill. This has been invaluable to me. When I started Muay Thai I was becoming a disillusioned hockey player. The disillusionment came from my teammates’ and opponents’ attitudes towards competition. Too many players were only there to acquire some sense of the significance they were missing from other aspects of their lives. I objected when this manifested as checking from behind or slashing ankles. Abusing power and operating outside the rules became a deterrent to hanging out with the guys I had played with since high school.

Luckily for me, as I started learning strength coaching, my best friend started at Siam #1. As he became better at Muay Thai, I was learning more about how the body works. As he progressed in his fights, I was discovering how to fix my own injuries and imbalances. When he became a Poo Choi, I was learning how to fix and prevent others’ injuries (including his), while helping them perform better. As he started a Muay Thai club at University of Waterloo, I was shaping the physical development of the athletes of his club, as well as 600 teenage boys at St. Andrew’s College. When we both took a course about back injuries and core training at U Waterloo, I started Muay Thai classes with Kru Andrew. Muay Thai was a great way to use my athleticism in a different, more positive way.

York Muay Thai was recommended to me by Kru Andrew, as he felt that the instruction was what I needed. The first lesson was that Muay Thai, especially here at YMT, is an uniting force. We come here from diverse backgrounds with the goal to grow personally, but not at the expense of anyone else by breaking the rules. A great example of this was when I cornered for the first time. During one of the intense exchanges one of the fighter’s head gear came down over his eyes. The referee didn’t step in right away and the other fighter stopped. He could have taken advantage, but instead waited until the helmet was adjusted. It’s that sort of respect that I appreciate and have come to expect from this community.

I started leading workouts here at YMT a year ago to bring science based physical development to the sport. From this I’ve grown as a coach and I’ve applied what I have learned in my Masters Degree. To improve on Robert Burns quote (“To see ourselves as others see us. It would from many a blunder free us”); “To see ourselves as an expert sees us.” This is the essence of coaching. A good coach can see a student in a way he cannot see himself. Observation is one thing, but the expertise to prevent the consequences of bad habits is essential. That’s why I get coached on my resistance training and why I value the quality of the instruction at YMT. Here, not only are the Krus and Poo Chois experts, but once you are a blue short in sparring, your partner uses his/her expertise to show weakness. Only once I started sparring with other gyms did I see the same ego/power/dominance driven attitudes about competition that had pushed me away from hockey. The further I go in Muay Thai, the more I value what makes YMT such an exceptional place. Above all, it’s the personalities and intentions of our students and instructors that set us apart.

Plato is credited with saying ‘ignorance is the root of all evil.’  Our bodies are a resource many of us are ignorantly wasting daily. Unhealthy movement is widespread in our society. The current trends in physical education are inadequate and often backward. My goal is to make proper human movement instruction a priority for our education and health care systems. Every high school student should have access to functional/structural resistance training as a way to prevent health care issues later in life: obesity, diabetes, arthritis, low-back and other joint pain, heart disease, osteoporosis etc.

YMT students are proof that mindful Strength and Conditioning can help make a better Nak Muay. The highlight of my week is often seeing you make the connections between your MT training and resistance training. Consistent progress will mean more of you will be meeting the strength benchmarks that will allow power training to begin. We are on the cusp of some exciting changes at YMT. Your hard work will mean you’ll be able to take advantage of all of them.

From Coach Grant
Dropped on the Internet by Unknown at 3:10 PM No comments:

Be conscious in training, be accountable in the ring, be the best version of yourself in life.

Dropped on the Internet by ThisOne at 4:11 PM No comments:

Back to School, Back to Basics

"It is, therefore, essential to preserve the balance and poise of the fighting turret carrying your artillery. No matter in what direction or at what speed you move, your aim is to retain the fundamental stance..."

This week has been all about the basics...so much so that you may be getting a little tired of it. Those with ring experience can tell you, there is nothing nearly as valuable as a strong basic stance when you're under severe pressure. Good footwork isn't about shuffling or even angling necessarily. It's about efficiency and stability: Can you be mobile without unnecessary motion? Can you absorb and return at a moment's notice? 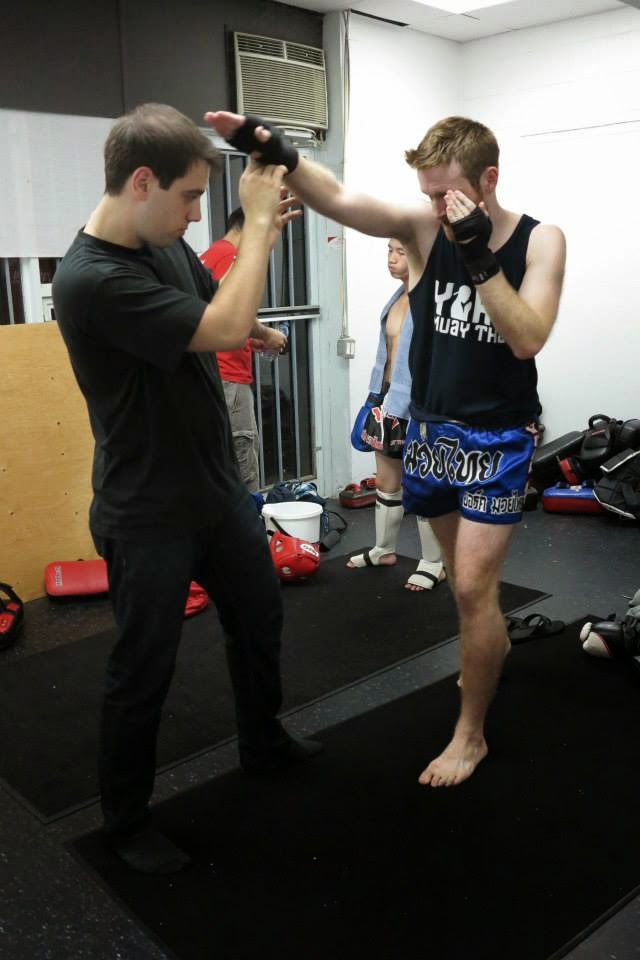 Dropped on the Internet by ThisOne at 4:08 PM No comments:

What's just as beautiful as martial art technique, if not more, is seeing parents acting as true role models for their children. "Mom, Dad and Me" classes at YMT, every Tuesday and Thursday.

Dropped on the Internet by ThisOne at 4:01 PM No comments:

Check out the latest fights from some of the world's top strikers! Andy is nothing short of a K-1 legend (multiple time winner), Murthel also a former K-1 champion, and Sittichai a decorated Muay Thai champion.

These fights are all under K-1 style rules, which mean no elbows and limited clinch work allowed. Throws/sweeps do not count for any points.

Dropped on the Internet by ThisOne at 7:09 PM No comments:

Here were the latest fights in Thailand, from well known stars Buakaw, Pornsanae and Sam-A.

Lots of action and lots to take in. I'd bookmark/favourite the video so you can come back to it as often as you need :)

Dropped on the Internet by ThisOne at 6:58 PM No comments:

Don't forget that York Muay Thai's holiday deal is still on! You can grab 3 months training for only $199, available till Jan 20th!  Try your free week first, but we know you'll love it ;)

Available to all students, new and old for a limited time!

Dropped on the Internet by ThisOne at 11:12 AM No comments: