Dropped on the Internet by ThisOne at 3:52 PM 1 comment: 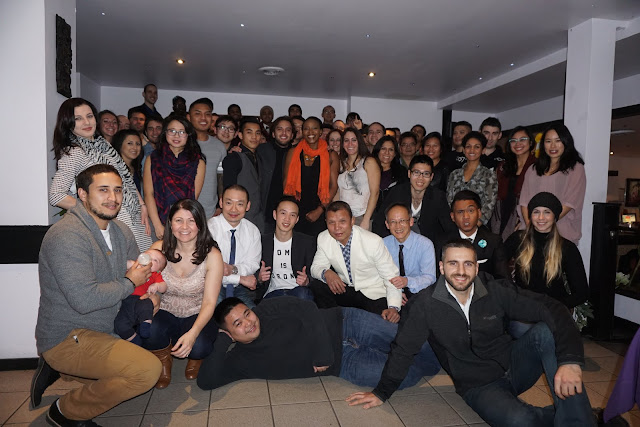 As we go into the new year, let's recap some of this year through the Annual York Muay Thai Awards that were presented at the Holiday Party! 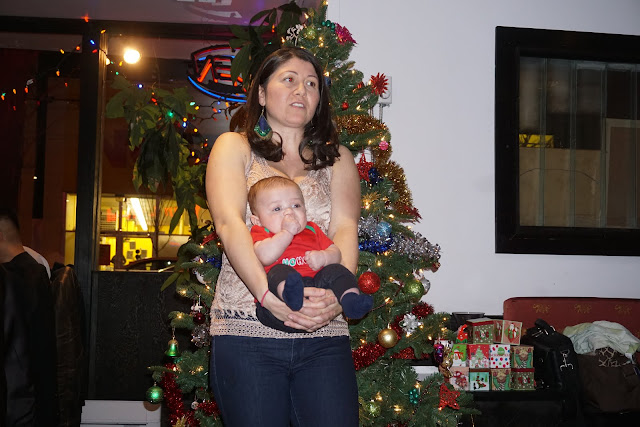 Each award is carefully chosen by Kru Jen and the senior instructors. Congratulations to all recipients...but most importantly, keep striving to improve as you lead the way for your team! 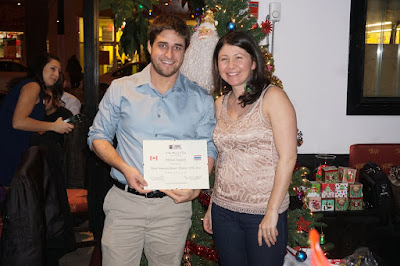 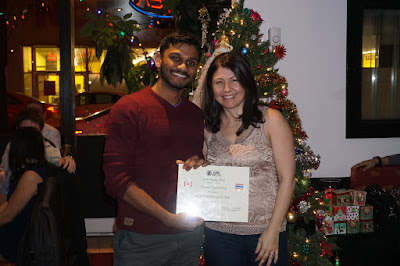 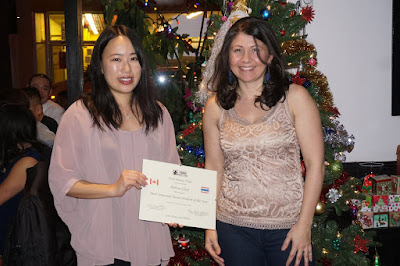 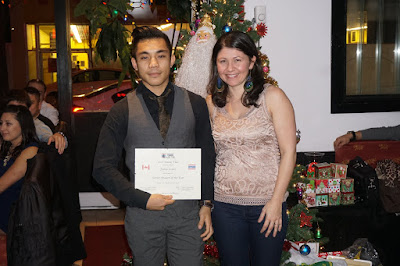 Fighter of the Year for 2015:  Shashaank 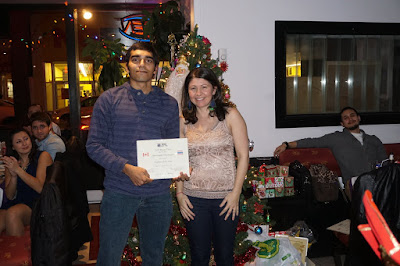 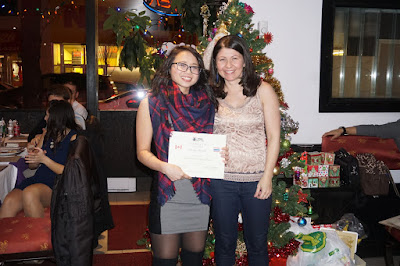 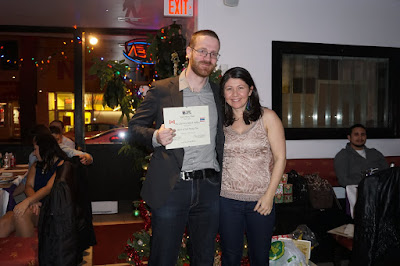 Instructor of the Year for 2015: PC David 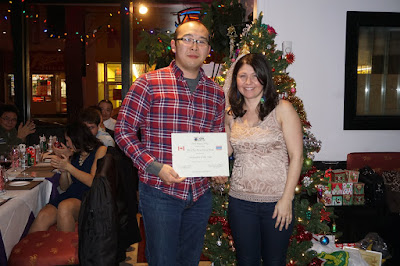 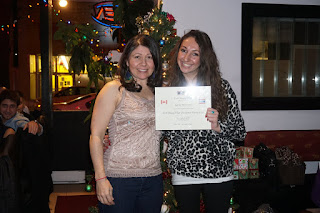 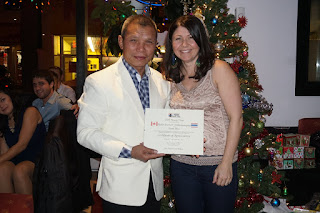 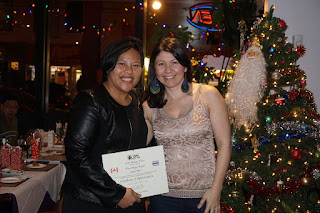 Dropped on the Internet by ThisOne at 10:05 PM 1 comment:


Here are your York Muay Thai amateur athlete highlights of 2015!
Many of the people in this video were first time fighters who decided to step up and test themselves. There were wins, losses, demonstrations of heart and skill...The experiences have only made us better.
We will only keep striving to improve!
Soundtrack:
Stand up- The Prodigy

Dropped on the Internet by ThisOne at 11:27 PM 1 comment:

Dropped on the Internet by ThisOne at 5:41 PM No comments: 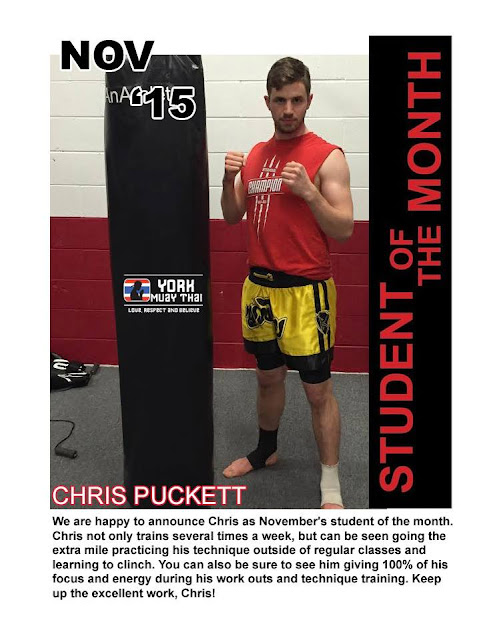 Dropped on the Internet by ThisOne at 8:15 PM No comments: 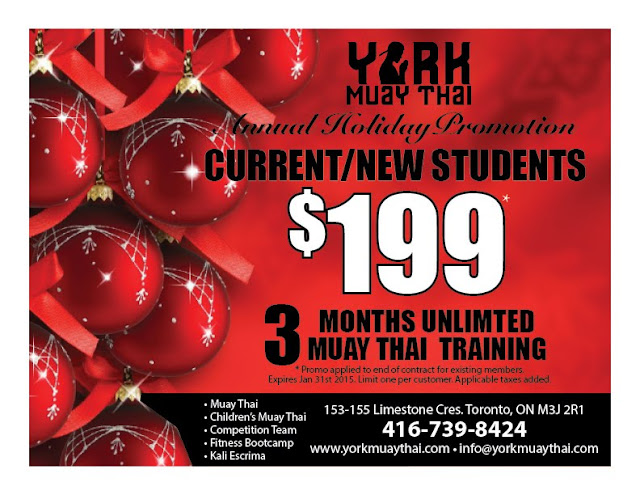 
Dropped on the Internet by ThisOne at 3:58 PM No comments:

RSVP FOR THE YMT CHRISTMAS PARTY AND FOOD DRIVE BEFORE DEC 16!
CLICK HERE FOR DETAILS!


Dropped on the Internet by ThisOne at 3:58 PM No comments:

The beginning of teep month has meant revisiting the technique from the start, and slowly working our way up to combinations, timing and strategy. It's also meant a great way to start using the new Kimurawear belly pads and Fairtex Thai pads we just got in!

Don't forget, you can always come early or stay after class to do a little pads practice with a friend. Reviewing what you learned in class or just focusing on the techniques you feel least comfortable with will go a long way.

Dropped on the Internet by ThisOne at 3:54 PM 1 comment:

Don't forget to work your clinch!  Drills on Monday, and free style on Tues/Thurs at 9 :)

No clinch, no chance!

Dropped on the Internet by ThisOne at 3:50 PM No comments:

The Matics Method: The Strenuous Life- Article by Matt Embree

"Giving up was a thought, but it was never an option for us."

Some stories and insight into what makes the strongest fighters.


Dropped on the Internet by ThisOne at 3:48 PM No comments:

PCP's Movie Pick for December: The Boxing Girls of Kabul (2012)

Okay, so kind of a tough one to watch this month but well worth it. It is relatively short, coming in at a little less than an hour. That being said, it is an incredibly engaging, at times heart-wrenching look at the realities of life for women simply looking to live their lives in an oppressive state. Like last month's choice, you will feel soft after watching this documentary, however for a completely different reason.

"It was the first time I had seen a ring, and there I was climbing into it."

"The other boxers aren't sad, they have no sorrows. No one threatens them. They are very free." 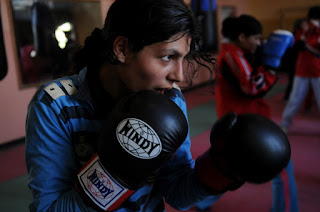 The Boxing Girls of Kabul is an absorbing look at the lives and training of the Afghanistan's Womens' National Boxing Team. It focuses on two sisters, Shabnam and Sadaf Rahimi, as well as their close friend Shahla Sikandary as they train and prepare themselves for amateur boxing competition. Their head coach is a man named Sabir, a progressive minded man who had Olympic aspirations before the Soviet war in the late 1970s. They train at the Olympic Stadium in Kabul, an ominous stadium that was used for public executions by the Taliban when they were in control of the country, less than 20 years ago. Although the Taliban no longer rules, they are still present in the country in the form of a hidden insurgency and remain a serious threat and source of fear. They attempt to compete at an international level, however they find themselves seriously outmatched by better funded and trained teams. Upon their return home, the athletes and trainers are subjected to death threats, not only themselves but their families as well. 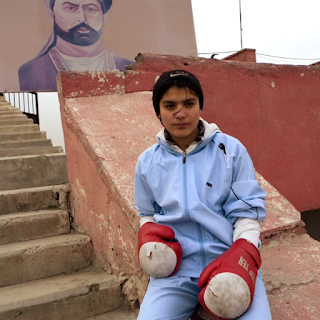 The determination and will of the fighters in The Boxing Girls of Kabul are a wonder to behold. They are drawing upon a very limited talent pool. They have no ring. They have very little equipment and time to train. There is no amateur boxing circuit in their country, so there is no entry level competition, meaning they are put in deep at the highest level of amateur boxing right way. They live in constant fear that those less progressive could attack or even kill them and their families. A brother of one of the girls explains that he doesn't like that she boxes because he fears that, should the Taliban take control once again, they will kill her and everybody in their family. Another of the girls is told by a man who recognized them from the news that he would kidnap her if he ever saw her alone on the street. The head coach believes that a man nearly shot him on the street because he trains girls to box.


Yet despite all this, they don't stop. 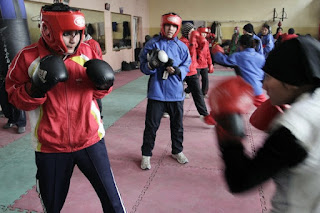 Although The Boxing Girls of Kabul is only 52 minutes long, it stayed with me for a long time after watching it. It is multi-dimensional in its effect. It had me considering how privileged I am to be able to train and fight at my leisure (next time you complain about no showers at the gym, think of this movie). It gave me a sobering look to everyday life in a country where women were not even allowed to go outside until a few years ago, full of instability and unrest. It showed me will, resolve, and determination to be free at their purist. And finally, it had me asking myself this complex question: Would I still train and compete in my chosen  hobby if it meant that my family would receive death threats?

Please watch this film. It's available on Netflix.

Christmas Party December 20th! RSVP for your spot BEFORE Dec 16!

$35 cash includes dinner, tons of giveaways/prizes, and the best company in the world :)
Canned food drive in effect.

RSVP with the front desk/Kru Jen before Dec 16!!


Dropped on the Internet by ThisOne at 6:11 PM No comments:

It's a late post but we were sent some beautiful photos taken of Shanks and Julius from their bouts in October. Photography by Jason Fowler and Mike of TKO! 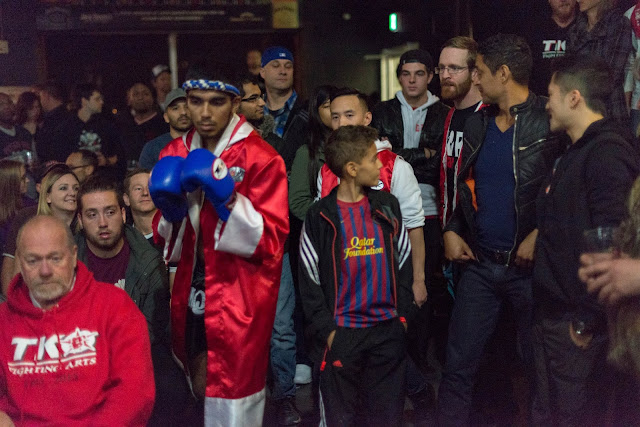 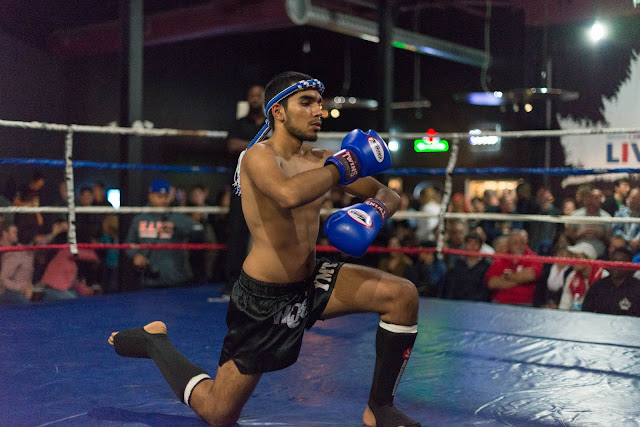 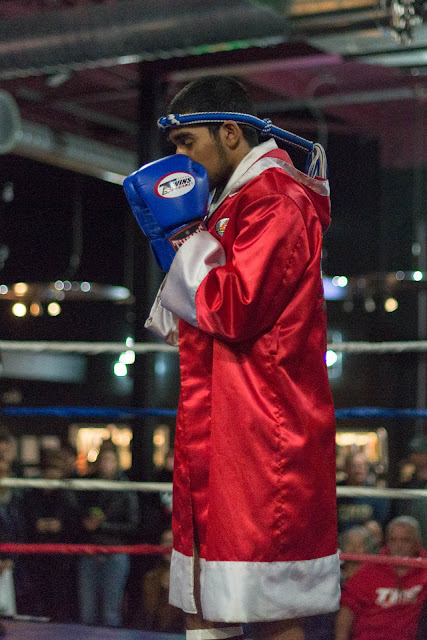 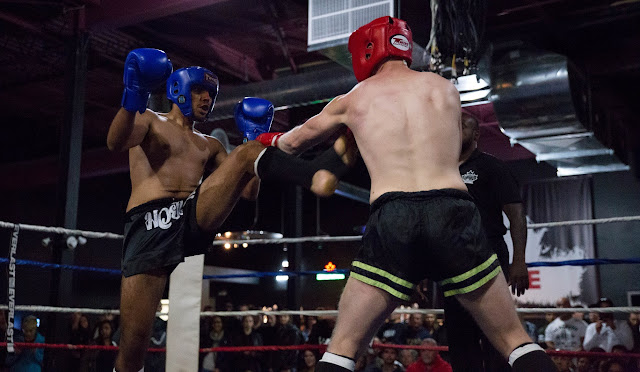 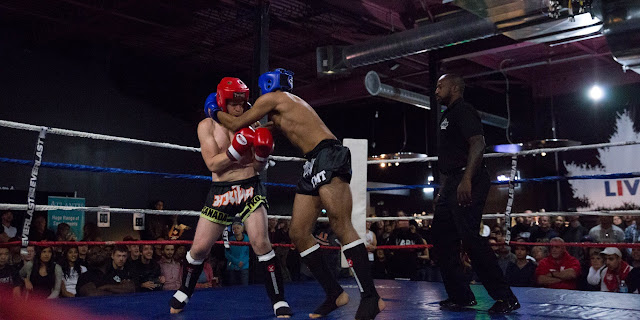 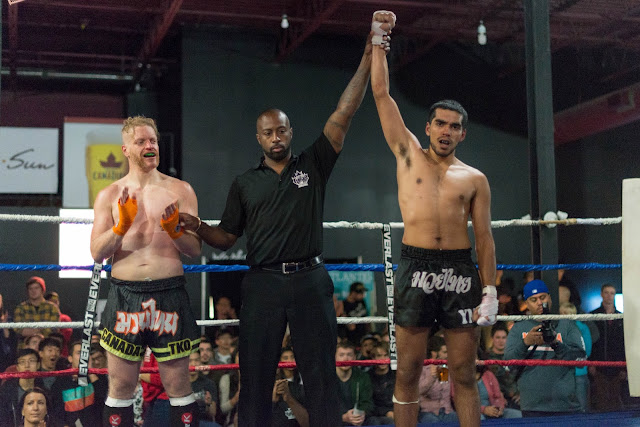 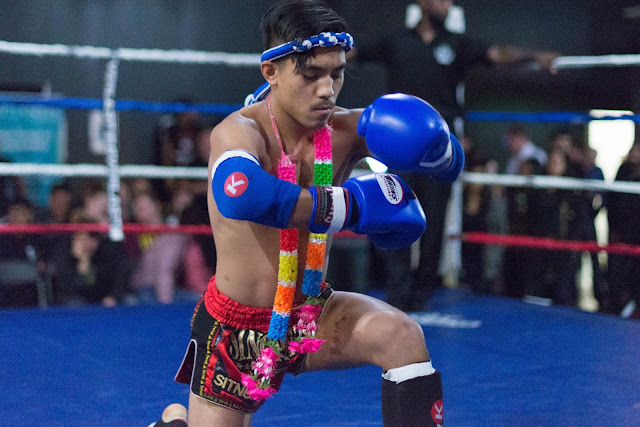 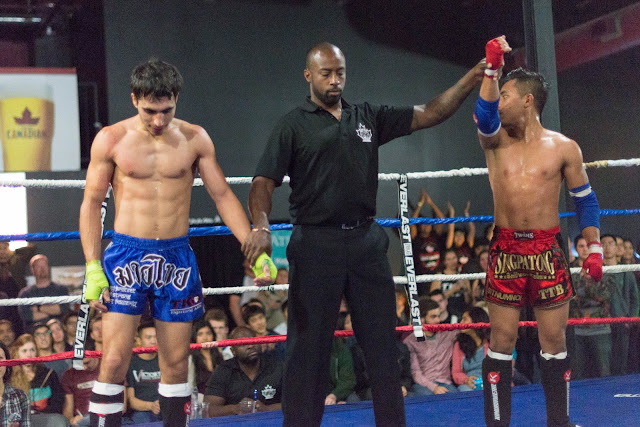 Dropped on the Internet by ThisOne at 6:07 PM No comments: