I assume most of you guys reading this blog don't keep up with Muay Thai or are familiar with the big names.

We don't exactly have a lot of outlets for watching pro MT here, so I can't say I blame you. It's hard to get into something without the buzz.

So here's the latest in the MT world...Buakaw fought in London against a young fighter Jordan Watson over the weekend. If you didn't know, it was supposed to be a big deal lol

Jordan was supposed to be on the Contender Asia Season 2 (which no one has heard about in a while), and has built up a strong rep 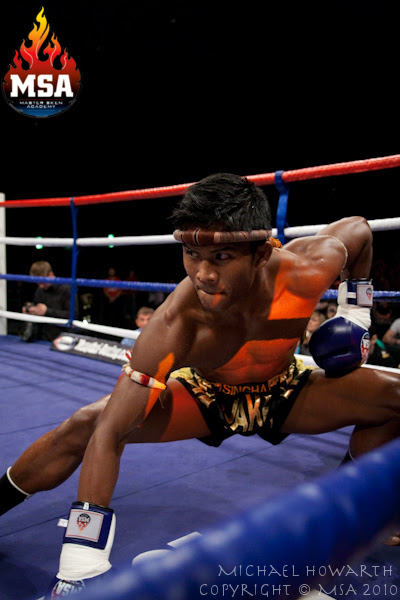 
It was suppose to be a great fight, but there isn't a lot of video available yet...KEEP watching this post for the FULL video yet to be uploaded

Here's what we have so far:

Dropped on the Internet by ThisOne at 10:33 AM 2 comments: 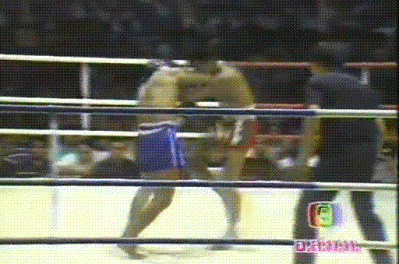 Samart Payakaroon was arguably the best Thai fighter ever. Wangjannoi was one of the few who defeated Samart.
Samart later claimed that Wangjannoi was his toughest fight.

Kru was talking about studying fights objectively, and looking for the story behind what happened in the fight (why does a fighter move that way? what kind of strategy did they employ to land certain techniques?)

This is MY personal take on this fight:

Although Wangjannoi showed a lot of dominance of the ring space and was definitely the aggressor, I thought what Kongtaranee was doing was far more interesting.

SPOILER:
Wangjannoi was able to press forward and dictate most of the action, which earned him the win. Despite this, there's a lot I picked up on my own from watch Kongtaranee.

While my interpretation of the fight is not necessarily the best and may also change after watching the fight several more times, it's just to show you an example of small things you can look for in any fight and add it to your personal understanding of the sport.
Dropped on the Internet by ThisOne at 10:32 PM No comments:

A battle from Lumpinee

I've already posted a couple of fights between these guys. Namkabuan is currently my favourite fighter to watch and Nuanthoranee is nothing short of a monster in the ring (he is a current pad hold for Masato).
Dropped on the Internet by ThisOne at 12:19 AM No comments:

Kongtaranee is the brother of the famous Samart Payakaroon Sityodtong. Both brothers were legendary champs, although Samart is a little more well known.

Just like Kru J was saying, at the end of the day: Muay Thai is a damage art, not a points art. Despite the scoring systems of the sport, the bottom line of every Muay Thai technique's design is to cause damage, not necessarily to "score".

Sityodtong with his champions...I believe Kongtaranee is on the floor
Dropped on the Internet by ThisOne at 12:13 AM No comments:

Lumpinee and Thailand champion Saiyok Pumpanmuang (Muay Thai Plaza) was invited to fight in Edmonton back in October.

Watch the ending of the fight...for the reason why it's not the best idea to block with your elbows or any of your joints for that matter. It can work in your favour, but carries a huge risk.
*the fighter may not have blocked with his elbow in this fight, and instead was unlucky to catch the strike on the joint. Either way, it still hurts*

Watch: http://www.youtube.com/watch?v=FKao3Jiji1Y
Dropped on the Internet by ThisOne at 11:09 AM No comments:

http://www.canadianimmigrant.ca/SuchartYodkerepauprai
Dropped on the Internet by ThisOne at 11:08 AM No comments:

The Value of each Weapon

I was talking to one of our fellow students the other day who said something to the effect of: "I default to using teeps (push kick), which is too bad because they aren't that damaging"

Teeps done right are damaging. True, teep isn't a weapon primarily used offensively as a stand alone technique or follow up (as Kru J was discussing with us this week), but you can't under estimate its uses when executed properly. While a lot of people are under the impression that it's mostly a "push", precise and strong teeps dig into their targets (a force made stronger when an opponent walks into a timed one).

A nice direct teep can make it very hard to be touched, and can hurt a lot...they also challenge an opponents confidence.

By no means am I saying that you should rely on teeps to win fights, or that there aren't more than one way to use the technique; You can decide for yourself in time how you feel about it and use it, weighing the risks and gains in a given situation. Muay Thai is a great art and sport because of the room for personal skill and strategy (look len).

All I'm trying to do is show that each Muay Thai weapon is part of a dangerous arsenal. When each weapon is sharpened as much as possible, each weapon is devastating; even if its name has been translated into something sounding as harmless as "push kick"
Dropped on the Internet by ThisOne at 6:32 PM No comments:

Congrats to Patrick, Mike (Science Guy) and Serge for running the Mississauga half marathon on Sunday morning!

To view all photos of their epic run, click here

Here are their mug shots at the race


Boris also ran the 10k on Saturday night. Congrats Boris!
Dropped on the Internet by ThisOne at 12:07 AM No comments:

Two legends go at it. I believe this event was sans elbows

Watch: http://www.youtube.com/watch?v=BxpXsQUF69k
Dropped on the Internet by ThisOne at 1:13 AM 2 comments:

Dropped on the Internet by ThisOne at 9:10 PM No comments:

A great fight that's both technical and full of action. It gets better as it goes on.

Anuwat (pictured on the right), as most of you know, is a Thai beast known for his dynamite punches and low kicks. He has a ridoncuolous amount of titles

Duwao is a former Omnoi stadium champion, and has defeated many strong fighters in his weight category. He fought many times at Rajadamnern

Dropped on the Internet by ThisOne at 1:04 AM No comments:

Being able to apply the basic defenses for the "plumb" or "plahm" position is important...

During his time he fought many top international fighters as well (like Rayen Simson, Ramon Dekkers and Sakmongkol...I will post these fights soon enough, since they are actually very good, instead of a one sided show that this one happens to be).

Despite being way past his prime, he stepped up to fight some very strong young guns like Buakaw and Soren Mongkongton
Dropped on the Internet by ThisOne at 12:31 AM No comments:

A big thanks to Linda Ooms (professional Muay Thai fighter and champion from Holland) and Tim for visiting and training at York Muay Thai!

More about Linda's accomplishments and an interview here: http://warriorqueenproject.blogspot.com/2009/07/fighter-interview-linda-ooms.html 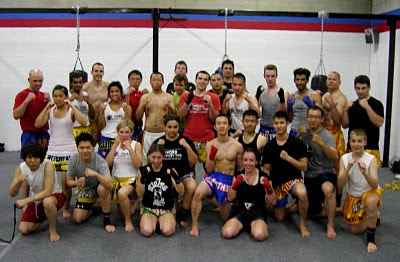 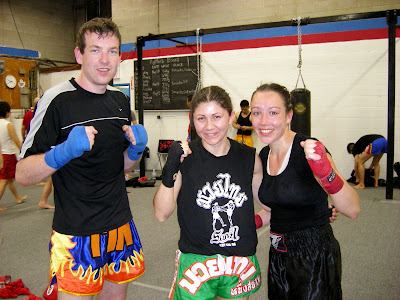 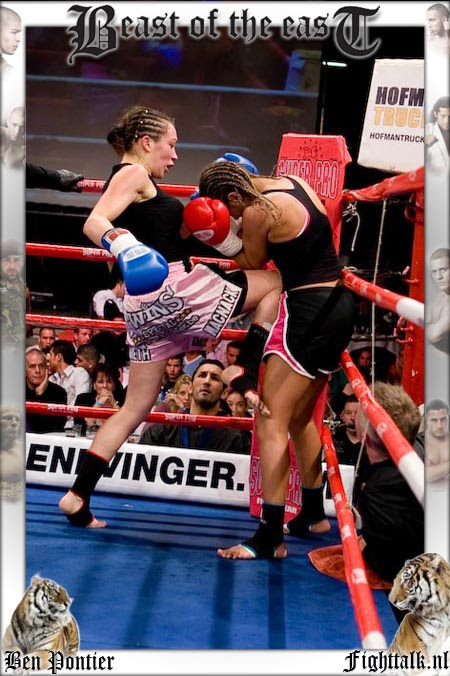 Dropped on the Internet by ThisOne at 12:28 AM 3 comments:

Trapping the leg for a counter: Buakaw vs Sato (video)

Kru was talking about trapping the leg with two hands and countering right away in today's class...here is Buakaw using this tactic against Sato

Watch: http://www.youtube.com/watch?v=wMEQYOfGBC8
Dropped on the Internet by ThisOne at 12:25 AM No comments:

In this fight, we get to see Namkabuan fight both Manu and Eddie as a tag team. Manu fights the first 3 rounds, and then Eddie jumps in fresh to finish off the last 2.

Manu Ntoh and Eddie Saban
Namkabuan is one of my favourite fighters. He's no stranger to fighting larger opponents (he fought a war against the legendary Sakmongkol in his prime, giving up a fair amount of weight).

As such I like watching him because he adapts and uses the ring according to who he fights, whether he is trading with a regular rival or counter fighting a bigger foe.

Manu is fairly well known, and Eddie went on to build a name for himself. Although these guys definitely looked a lot larger that Namkabuan, they seemed to be a lot less experienced at this point in time...so I guess there's the trade off.

If I'm not mistaken, Songchai promotions were staging these 2 on 1 fights for fighters that were particularly dominant in Thailand. Months before this fight, Namkabuan's friendly rival, Nuaranthoranee, also fought against the Manu and Eddie tag team but lost.

The most recent 2 on 1 fight was Saenchai vs Nong O and Sagetdao, I believe.

Seems like the tag team doesn't get much out of it though...if they lose, it looks bad...if they win, it's not the sweetest victory. Oh well.
Dropped on the Internet by ThisOne at 1:13 AM No comments:

According to google, Lamsongkram Suanaharnjawee (later known as Lamsongkram Chuwattana) and Hayato were ranked 1st and 2nd respectively in the prestigious Rajadamnern stadium at this time.

Lamsongkram of course went on to be champion of this stadium and the WBC, and Hayato went on to be a title holder in Japan kickboxing leagues while also competing in K-1 MAX.

I've posted Lamsongkram on this blog before. He's never been one to really engage or deal with punches...but he loves delivering elbows and knees.

Hayato shows a lot of heart and takes the fight to the taller Lamsongkram.
Dropped on the Internet by ThisOne at 9:33 PM No comments: